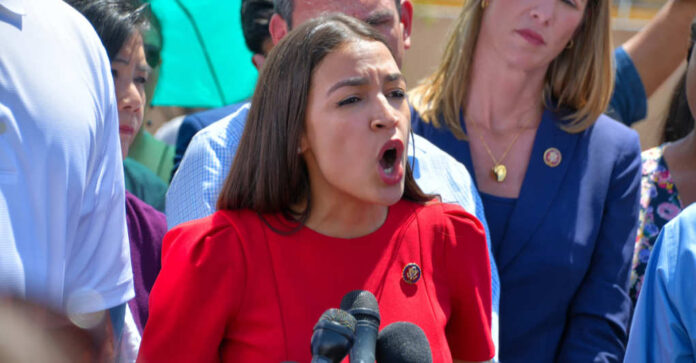 Progressives have a hard time accepting anyone who thinks on their own merits, or who has a differing opinion than the opinion from the top. So, for AOC to be as blind as Mr. Magoo as to why Sen. Kyrsten Sinema (D-AZ) should remain a Senator is not surprising. Never mind the fact that a member of the House of Representatives and a Senator have two very different jobs and two very different levels of power to their voice.

Speaking to MSNBC’s “The 11th Hour” this past Wednesday she made her disgust with Sen. Sinema crystal clear. “I don’t believe she’s really given a compelling case as to why she should be re-nominated as the Democratic nominee for United States Senate in Arizona. She has proven herself an obstacle to the right to vote in the United States. She is not an ally on civil rights. It is becoming a precipice and rather contributing to the threat that we have in stabilizing our democracy. She is not standing up to corporate interests, in fact, she is a profound ally to them. And I believe that, you know, she is not doing what voters in Arizona sent her to do.”

Unfortunately for AOC, her problems with corporations have cost her district plenty as their loss of a multibillion-dollar Amazon contract was all her doing. Something that she loves to conveniently forget about. Another forgotten fact is that Sen. Sinema does not have a duty to the Democratic party. She has a duty to the citizens of Arizona. Not the illegal immigrants. Not to people from California or New York.

The obstacle to voting Sen. Sinema stood for was an obstacle from open voting with no real rules or regulations. Something that if allowed to be enacted could potentially destroy the power of the vote in America forever. This is something nobody should be taken lightly, and yet to AOC, this is all a joke. A topic she can just waste the American taxpayer’s money on.

People like Sen. Sinema or Sen. Manchin (D-WV) are the reason we are not in a completely socialist country. They refuse to put the party over the best interests of their constituents. What AOC fails to understand is even if Sen. Sinema was censured by the AZ Democratic Party, she isn’t up for reelection until 2024, and she has openly stated that she would be going for the issues she believed most mattered to Arizonans and not just by the party line voting guide.

The idea that a Senator cannot vote away from where the party is voting is absurd. If they disagree because of something that is attached to the bill, or it is a move that can potentially uproot democracy then they need to stand against it. Just like Sen. Sinema did with the filibuster and voting rights. She knew how badly it could change things, and how against the idea the party was when they were not in control. What’s good for the goose is good for the gander.

While AOC continues down the path of the blind leading the blind, Sens. Sinema and Manchin will continue down their path of attempting to keep this country from being torpedoed by the progressive left and their socialist agenda. This is a sad and lonely road in the public eye, but one that many says gets them both a lot of off-camera compliments from fellow Democrats as well as Republicans. That in and of itself is a huge accomplishment, and something many do not get. Hopefully, these two keep holding the line, and with the power shift predicted to come in 2022 they will hopefully find themselves surrounded by new allies that will help AOC and others to see why these two are some of the only Democrats without their heads in the sand.