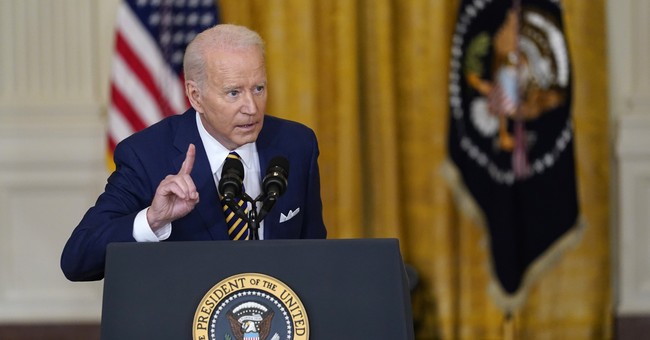 When Joe Biden was campaigning every other week or so while running for president, he made one promise repeatedly: To “shut down” the coronavirus.

With a year of his presidency in the books, we can confidently ascertain that he broke that promise. Cases have exploded, more people have died under the current administration than the last, and COVID-19 is now endemic by any reasonable standard. Those realities have pushed Biden’s disapproval to a new milestone. For the first time since taking office, he’s now rated below Donald Trump at the same point in his term.

It’s hard to overstate how much of an accomplishment this is for Biden. Unlike Trump, he did not enter office with a completely polarized electorate giving him low marks before he even had a chance to govern. Rather, Biden got a typical honeymoon phase, largely riding on his pledge to return the country to normal. By the late summer of 2021, that was gone, though, with the failed withdrawal from Afghanistan representing the breaking point.

Biden has been flailing ever since, and that continued yesterday with what can only be described as a desperate pivot. After failing to shut down the coronavirus, the president is now moving to “end cancer.”

At first, I was hesitant to dunk on this too much because, in a vacuum, it’s a good thought. Who wouldn’t want to end cancer, right? But the more I think about it, the more insulting this move becomes. Cancer is not a political toy. It does not exist to offer talking points to a wildly incapable White House looking for a deflection from its myriad of failures.

And to be clear, that’s exactly what I believe this is. It would be one thing if Biden had announced a real plan to fund new, ground-breaking cancer research. Instead, he announced a “cancer cabinet,” which is just Washington-speak for appointing a bunch of DC apparatchiks to highly-paid government positions. That is not the catalyst for ending cancer. It’s just an attempted PR ploy that diminishes the work actual cancer researchers have been doing for decades. Does anyone really think they were just waiting around for Joe Biden to get involved?

The president’s move comes across as not knowing when to put the shovel down. How deep does this administration want to dig the hole? What happens in two years when Biden’s new pledge and “cancer cabinet” haven’t produced any results? This is the problem with constantly promising new things when you haven’t even delivered on your prior promises. Using victims of cancer and their families as political pawns is not laudable. It’s abusive.

The timing and setup here are just too cynical to ignore. Why not announce this a year ago if it’s such a priority for the president? Further, making the big reveal a “cancer cabinet” is a very cheap attempt to give Biden credit for any future research breakthroughs, even if they have absolutely nothing to do with the White House. The topic of cancer shouldn’t be about assigning political points.

When the dust settles, this isn’t going to help Biden’s failing presidency, but another broken promise on such a serious topic will hurt a lot of people. That the administration didn’t seem to even consider that in their framing is disturbing.