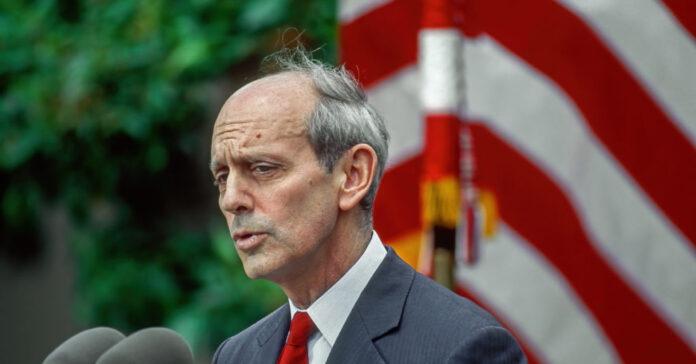 Stephen Breyer has been serving as a Supreme Court Justice since Bill Clinton nominated him over 20 years ago in 1994. He has seen a lot of very interesting, precedent-setting, and groundbreaking cases in that time. He is also the oldest member of the Supreme Court at 83. He has been a savior for the left by providing a very liberal and progressive point of view.

Justice Breyer still shows a deep love for the job, and he is actively involved in many cases. This dedication to the job has left many American’s wondering why he would step down. The reason is simple, pressure from his beloved Democrats (which he denies). They are afraid of losing his seat since they hold control of the Senate by a hair. By retiring now, he gives them a prime opportunity to get a one-for-one replacement with a similar mind.

Back in 2015, he was asked about retirement by ABC News and all he would say is “It’s a highly personal decision.” Combine that with his denial of Democrat influence on his timing, and it sure seems like he is doing it to help them keep the edge that they openly want to use to their advantage. Especially when you consider how Republican leader Mitch McConnell stated that they may block another Democrat from taking a seat if they can regain the Senate back in June.

With the current projections for Democrats, it would seem like losing the Senate is almost a foregone conclusion. As such, they are doing the same thing they tried to flambe Donald Trump for doing and using the timing to ensure they get someone of their political mindset sitting on the Supreme Court. Given his track record, it’s a smart move for the party.

In 2021 alone, he has been an author on important issues like the Affordable Care Act, the free speech rights of college students while off-campus, and a bitter copyright dispute between Google and Oracle. These decisions have already been referenced in numerous legal discussions and papers across the globe since the verdicts were rendered. Since 1994, he has been cited numerous times for his contributions.

Justice Breyer is leaving at a unique time. With ongoing debates about states’ rights, abortion, illegal immigration, and recreational marijuana taking up a lot of the agenda coming forth it may be in his best interests to retire as there isn’t going to be a better time for him to see his successor carrying out his work.

Earlier in 2021, Chris Wallace was nearly begging for Justice Breyer to retire. He saw the writing on the wall for the 2022 midterms and wanted to ensure the Democrats got one last good shot at having a guaranteed seat filled. With the uncertainty for them coming up, Justice Breyer made the most sense to end his term. For them, this changing of the guard can energize their campaigns.

Americans largely do not turn out in force for the midterm or special elections. The presidential elections get the most people out, so to have a better chance at getting people to come out a new Supreme Court Justice can really invigorate the voting base on both sides. For the Democrats, in particular, it can inspire their fan base as they see the red tide rolling in, and they want a chance to get some more blue in the waters. Unfortunately for them, as long as Biden is sitting in the White House anyone who isn’t a hardcore leftist will likely be voting for the conservatives.