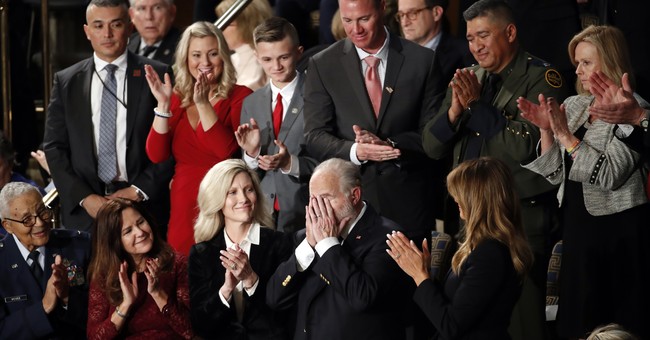 Don’t expect the teachers union to get behind this one as a recommended day off.

On Thursday, Missouri’s GOP-led House of Representatives approved a measure sure to make many a Democrat shriek.

Per the bill, January 12th would become a recognized holiday in the state.

Ladies and gentlemen, I give you Rush Limbaugh Day.

The man behind the golden microphone passed away in February, having been awarded the country’s Medal of Freedom the year before.

Seven decades before, he was born in Cape Girardeau, Missouri.

While still in high school, he graduated to disc jockey.

And eventually, he left the country:

Limbaugh has said he realized America was the “greatest country ever” when taking trips to Europe and Asia in his late 20s and early 30s, an experience that helped shape his political views.

“So, I go to Europe and say, ‘Wait a minute. Why is this bedroom so…old-fashioned and doesn’t work? What…is this? They call this a toilet?’ So I started asking myself, ‘How is it that we, who have only been around 200 years, are light-years ahead of people that have been alive a thousand?’ So, I started thinking this. It was a matter of genuine curiosity to me, and not from a braggadocios standpoint.

“I was literally interested in how that happened, and then I started to think about all the other things that we led the world in: Manufacturing, technology, innovation, invention, creation, and it all led back to liberty and freedom and the pursuit of happiness and dreams coming true and working hard for whatever you want and being able to do what you love, not just have to dream about it.”

1988 saw the first iteration of The Rush Limbaugh Show, and thirty years later, he was still at it — with a weekly audience of up to 27 million.

And now, over 6 million — the population of Missouri — may soon annually commemorate his birth.

Of course, Democrat lawmakers are opposed.

Per the New York Post, Democratic Rep. Ashley Bland Manlove condemned his “constant attacks on black people and other people of color.”

“Have you ever heard him say any negative things on the radio about any race or another?”

Rush’s longtime producer, Bo Snerdley, would surely defend him similarly — and has.

As for the bill, it’ll now go before the Senate, which — according to Ballotpedia — is under GOP control.

Meanwhile, the Republican move to honor El Rushbo trumped Democrats’ attempt back in January: Their proposal for a “Walter Cronkite Day” failed.

When Rush passed, social media was awash with celebration.

If I had to guess, I’d say expect the opposite if the measure becomes a law.