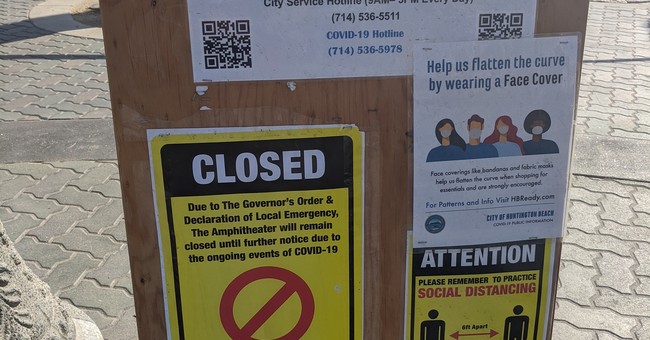 Now comes a new study from Johns Hopkins University indicating that the original COVID lockdown that most states had in the spring of 2020 had “little to no” impact on mortality. They conducted a meta-analysis of studies looking at the mortality rates.

“We find no evidence that lockdowns, school closures, border closures, and limiting gatherings have had a noticeable effect on COVID-19 mortality,” the researchers wrote.

But the research paper said lockdowns did have “devastating effects” on the economy and contributed to numerous social ills.

They said they did find a little positive effect from closing non-essential businesses likely related to bar closures — giving a 10.6 percent reduction.

“Lockdowns have limited peoples’ access to safe (outdoor) places such as beaches, parks, and zoos, or included outdoor mask mandates or strict outdoor gathering restrictions, pushing people to meet at less safe (indoor) places,” they wrote. “Indeed, we do find some evidence that limiting gatherings was counterproductive and increased COVID-19 mortality.”

They concluded, “Such a standard benefit-cost calculation leads to a strong conclusion: lockdowns should be rejected out of hand as a pandemic policy instrument.”

Think of the enormous harm that has been done by all this. The researchers note the incredible increase in drug overdose deaths — a 28.5 percent increase. Ninety-seven percent of teachers said their students had experienced learning loss. How many businesses and jobs have been lost that can never come back? How do you assess the harm of not being able to have a funeral when your mother dies? Or not being able to see a family member in a nursing home?

It was always a question that should have been asked from the beginning: where is the balancing? Yet everything was thrown under the bus to the virus, even other illnesses which then didn’t get proper treatment, and who knows how many people may have died because of that?

I like that the researchers make one of the most important points that should be made about this failed experiment — that it has grievously undermined “liberal democracy.” We have moved from understanding that laws should be voted on by the representatives of the people to governors and presidents can simply impose mandates on us all by fiat, without the consent of the governed or the normal process of law, and that anyone who doesn’t agree with that un-American approach somehow wanted to kill Grandma. Can it finally be that sense is coming?

So, how is the media dealing with this news? Do they want to attack Johns Hopkins as “not science”? According to Newsbusters, the three evening news networks ignored it. Fox covered it.

It’s good that they are putting this study out. Unfortunately, it’s a bit late, and we can’t replace what we can’t get back.