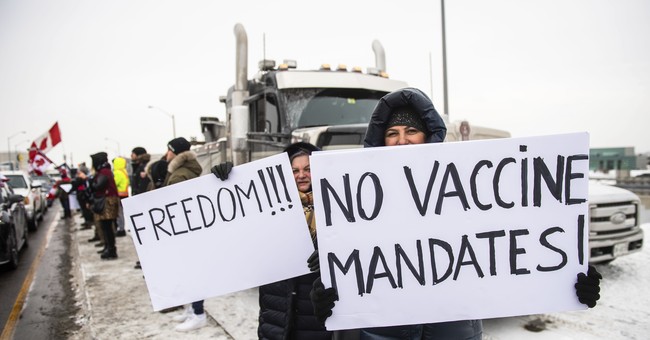 Sometimes people have to see things for themselves to get the message.

The trucker convoy with thousands of people protesting across Canada, and particularly in Ottawa, may have brought home in real-time to the politicians how much people are objecting to mandates and how much they have hurt people.

Now, the National Post acknowledges, there is a “growing chorus of politicians and health experts” calling for ending extraordinary measures and moving more toward a “learn to live with it” approach. Although they hastily add in the title “not because of the truckers,” because media is still going to be media.

“We have let our lives be controlled for the last two years in a significant amount of fear and now we are going to have to change some of that thinking,” Ontario’s top doctor Kieran Moore said in a public address last Thursday.

Moore added, “we can’t eliminate this threat, in fact, we have to learn to live with it.”

Eileen de Villa, medical officer of health for the City of Toronto, similarly said last Friday that residents should gird themselves for a future in which COVID-19 is managed like influenza.

“Some flu seasons are worse than others. We know it has impact on our health-care system, and yes, it does make a number of people sick, unfortunately, and yes, unfortunately some people do lose their lives to it,” she said, adding that Canadians must nevertheless “find ways of balancing other activities of life along with the control measures.”

One of the most notable ones who pushed for early tough restrictions is British Columbia Provincial Health Officer Bonnie Henry. Now she is saying that we have to treat it more like the flu and she’s drawn down quarantine measures.

Alberta and Saskatchewan followed soon after. On Jan 24., even as COVID-19 hospitalization peaked across Saskatchewan, Premier Scott Moe said his government would not be meeting the surge with new restrictions.

“It’s going to remain an ongoing concern for all of us, but we live with other diseases in our communities and province that are also ongoing concerns,” he said.

Now, this was moving in the right direction before the truckers but, with the truckers, we’re seeing more people not being shy about voicing it.

Protests have been taking place across Europe and countries there are also moving toward treating COVID as an endemic illness. Denmark has ended all pandemic restrictions and Spain, Ireland, the U.K., France, and Germany are also moving the “endemic” phase.

What about the U.S.?

A bipartisan group of governors told Joe Biden during their meeting on Monday that they wanted to “move beyond the pandemic,” according to Arkansas Republican Governor Asa Hutchinson. He said they wanted to partner with the administration. “[W]e asked the President to help give us clear guidelines on how we can return to a greater state of normality.”

So what was Joe Biden’s response? “We’ve got a way to go on that, in my view, but we’re moving.” In other words, I’m still going to be imposing things on you regardless of the facts or what anyone else is doing.

The answer, if they all agree, should be for all of them to move right around Joe Biden and return to normal in all their states and tell Biden to go pound sand. It’s more than time.