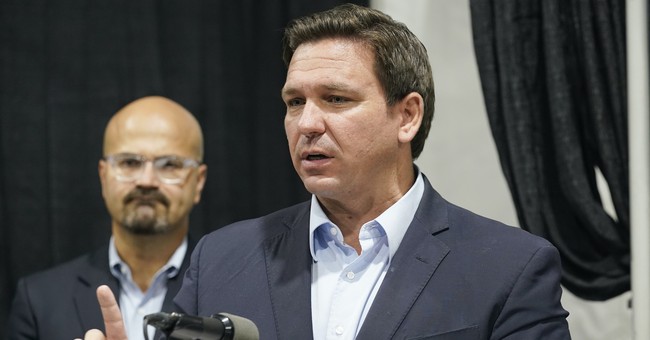 For the left, the playbook never changes, and that’s especially true in this current era of squealing “racism” and “white supremacy” in response to everything.

During Donald Trump’s presidency, a favorite game among Democrats and their media allies was to constantly ask the former president to condemn white supremacy. It didn’t matter if he did so nine times. If he didn’t do it the tenth time they asked, that meant he was on the side of the neo-nazis.

Some on the right thought those attacks were unique to Trump and that the left wouldn’t have the capacity to smear other Republicans in such a fashion, but the rest of us knew how naive that was. The next man up was always going to get the same treatment, and that next man up is Gov. Ron DeSantis of Florida.

On Sunday, a video of what appears to be around eight neo-nazis in the Orlando area appeared online. In response, Democrats immediately started demanding that DeSantis condemn them as if he had something to do with the demonstration.

For context, Florida is a state of over 21 million people. The idea that the governor of that state needs to schedule a condemnation every single time a few morons appear is nonsensical. That’s certainly not a standard that is applied to Democrats when it comes to Antifa violence (even though there is actually a political connection there), but the goal here isn’t to be intellectually consistent. Rather, it’s to paint Republicans as somehow personally responsible for every instance of prejudice that emerges, no matter how small.

There’s also an ongoing effort on the left to exaggerate the influence and effect of white supremacists, not because Democrats have genuine concerns, but because they find it to be politically useful. You see it in the Biden administration’s insistence that white supremacy is the biggest domestic threat in the country. You saw it in the constant badgering of Donald Trump to condemn white supremacy despite him already doing so in the past.

But if you ask a Democrat to name the last white supremacist attack given the supposed prominence, they’ll probably mumble something about January 6th, which was not about white supremacy and did not take any lives (although, the police that responded did). Past that, they’d be left reaching back to 2018 to cite the Tree of Life Synagogue shooting.

The point is not to say that white supremacy 1) doesn’t exist and 2) doesn’t sometimes lead to violence. Neo-nazis are real and they are the scum of the earth. But facts and context still matter, and the ongoing obsession with insisting they are the preeminent threat in America is almost wholly motivated by politics. Further, the idea that Republican politicians must rush to “condemn” every neo-nazi who shows up in public is ludicrous and obviously a partisan ploy.

So what’s the best way to handle these kinds of smears? DeSantis showed was alert enough to demonstrate it when he was asked about the supposed controversy on Monday.

Democrats count on Republicans not fighting back. They expect the knee to be bent, a condemnation to be made using the language they demand, and for there to be no return fire. Playing that game is a losing proposition, though. DeSantis’ response, calling out the left’s anti-Semitism while at the same time forcefully describing the attacks on him for what they are is how it should be done.