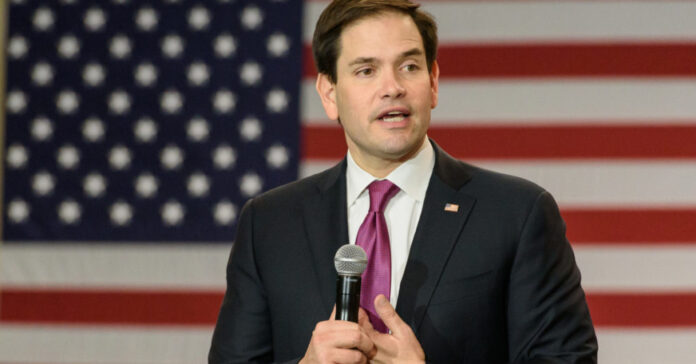 We’ve got our work cut out for ourselves when it comes to determining who is fit to lead our country. The 2022 midterms are all that anyone can talk about because it means that we can make some real strides to protect the democracy and lead our country toward a healthier path than it’s headed right now.

Keep in mind some of the chaos that we’re dealing with right now.

The POTUS is incapable of piecing a full sentence together without mumbling, forgetting someone’s name, or identifying Kamala Harris as the president.

Dr. Fauci fearmongers every time he speaks so that he can hold onto his “celebrity” status for a little while longer.

And the CDC can’t make its mind up as to whether we’re supposed to wear masks, wear N95 masks, or even get a booster shot.

Senator Marco Rubio had the pleasure of writing an article for the Daily Caller, where he focused on the real choice that we have during the November elections: “crazy and normal.”

Rubio talks about his own personal opponent, Val Demings, who is in full support of the Build Back Better plan that looks more like it’s designed for socialists than anyone else. Demings also approved amnesty for over 6 million Americans as well as a pathway to citizenship for convicted gang members. And if that’s not bad enough, she’s opposed to the border wall.

That says everything we need to know, at least about Rubio’s competition. Demings would rather focus on illegal immigrants over Americans, she has no desire to make people work for a living, and she’s perfectly fine with allowing more criminals to roam the streets.

Gee, let’s all get in line to vote for that crazy train right now…

As Rubio puts it, “Demings’ campaign is all about appeasing Washington Democrats and the woke left.” Meanwhile, he’s running to deliver results not only for Florida but to “restore the American dream.”

You’ll find that many conservatives who are either running for reelection or running for the first time have similar goals as Rubio. They want to prioritize American families. They want to remind people that the best way to fix America is to put America first. And that also encourages people to get back to work instead of rewarding them by sitting on their rear-ends while cashing stimulus checks that magically appear in the mail.

We’ve seen what happens with Democratic control. We’re living the nightmare right now. Not only do we have a Democratic president who acts as a puppet to the woke left but we also have the Dems in control of the House and Senate.

The 2022 midterms are a chance to hit the reset button. While we won’t be able to do anything about Biden sitting in the Oval Office, we can vote to put more Republicans in Congress, taking control of both the House and Senate. By doing so, Biden becomes a lame duck. It’s a chance to focus on the real issues – and stop allowing the Democrats to drive inflation up, unemployment up, and foreign relations into the drain.

Trump was right. DC really is a cesspool that needs to be drained. Luckily, we have people like Marco Rubio who are calling voters to pay attention to what really matters. His call to action should be on billboards everywhere: “I hope you’ll join me in rejecting the craziness that’s come to define the Democratic Party and electing conservatives like me who will chart a path forward to restore the American Dream.”