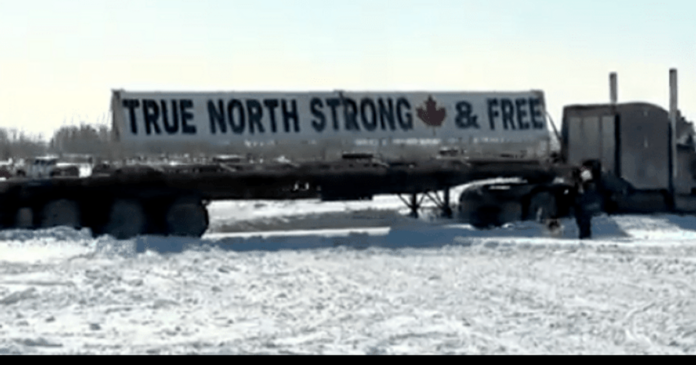 We’ve been reporting on the amazing anti-mandate Trucker Protest that has made its way across Canada from Vancouver to Ottawa, with a trucker convoy that is about 45-miles-long. That convoy is now clogging up the streets of the capital, and Justin Trudeau has reportedly beat it out of there rather than have to justify his actions.

They have brought Ottawa to a halt, and they say they intend to stay until mandates are dropped by the government. A lot of the trucks came with supplies, so they could camp out for some time.

The truckers have gotten support from people as varied as Russell Brand and Elon Musk.

Even though the truckers’ actions have been completely peaceful, the government has been trying to paint the protest as potentially violent. While media like Reuters pointed out how massive it all was, that was what they focused on.

Not only are they peaceful, as we pointed out, but they’re also even incredibly tidy, with such a massive group converging on the city. While the protesters certainly have to watch out for people trying to make the effort look bad, there hasn’t been anything that has been at all violent.

Media trying to attack the anti-mandate protesters have tried everything from suggesting that it’s going to be another ‘Jan. 6’ to claiming that the effort is somehow influenced by Russia. Check out this little bit of mania from the CBC.

Despite the fact there’s no evidence of that, it hasn’t stopped the left with their conspiracies. Yes, they must have learned their manic conspiracies from American liberals. This is the fallback, tired old smear that people on the left pushed for years against President Donald Trump.

But with a convoy that’s presented a lot of newsworthy moments, perhaps one of the best was when one leftist held up a sign trying to accuse the convoy of being a “white nationalist” thing and got a response from one of the protesters.

The leftist was holding up a sign that read: “F**k ur white nationalist agenda.” She was wearing a mask that wasn’t tight around her face, but she probably thought it was virtue-signaling her COVID purity.

But then a man stepped in and finished her off, saying the protest had nothing to do with “white,” and it went beyond just truckers — it was about freedom.

There are a lot of indigenous peoples and Sikhs who are truckers in Canada, in addition to a lot of other groups. You can catch some of the folks in this fun, Twitter thread about some of the people involved.

Imagine the effort it takes for white liberals to attack and call them white nationalists because they just refuse to accept that all people want freedom. But some — like these folks — are willing to stand for it.