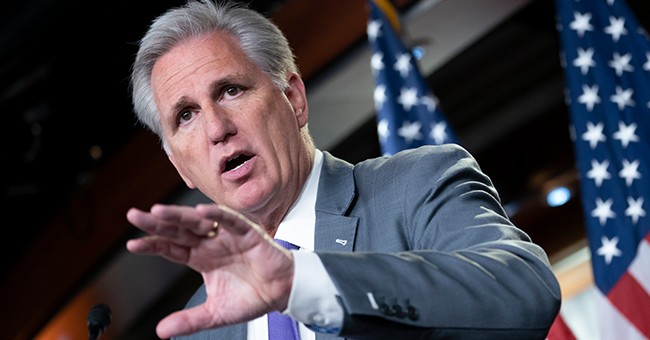 By all appearances, the Democrat Party is going to be delivered a beatdown of historic proportions in the 2022 midterm elections the likes of which haven’t been seen since at least the 2010 election.

Or that should be the case, at least.

With the prize seemingly there for the taking, House Minority Leader Kevin McCarthy is reportedly seeking advice from “the grandfather of House Republicans,” Newt Gingrich, who engineered the 1994 Republican Revolution with the Contract with America, taking back control of the House after a 40-year drought. From 1933 until 1995, Republicans controlled both the House and Senate for only four years.

Before we get to Newt, let’s talk about Kevin McCarthy.

Regardless of whether the GOP regains control of the House in 2022, or not, McCarthy will likely not be a lock to hold onto his leadership of the Republican caucus. Put frankly, his toughest challenge in 2022 will be hanging onto his job — either as Speaker or continuing as Minority Leader — not regaining a Republican majority. The “conservative right,” whatever that term has meant for the last 5-6 years remains up for debate, is not comprised of “yuuge” fans of McCarthy and his job as House Republican leader.

Reps. Lauren Boebert (R-Colo.) and Rep. Matt Gaetz (R-Fla.) have said they want Donald Trump to lead the House if it flips to Republican control — that will not happen (Trump as Speaker, not Republican control) — and technically, the post can be held by a non-lawmaker, but I’d be shocked if Donald would take the job, given his obvious plans in 2024.

As for Gingrich, he too is convinced the Democrats are going to be destroyed in midterms, telling Business Insider that “the total failure of the left is driving people our way in a very encouraging way.” If that shift continues, which in 2022 could result in “the most catastrophic election for Democrats since 1920” — when Republicans won their largest number of seats ever.

The former Speaker said Republicans have a two-part obligation as they battle Nancy Pelosi’s Democrats for control of the House:

One is to communicate that big government socialism doesn’t work and can’t.

And the other is to communicate what we would do, which … will be positive and solve problems.

In Virginia people looked up and said, ‘What do you mean parents can’t be involved in schools?’

Well, the minute you have parents involved in schools, you’re not going to have the nuttier left-wing activities.

Former Gingrich spokesman Mike Shields, who is now a McCarthy advisor, told Insider his former boss gladly counsels anyone who will listen.

There’s [sic] times when he’ll send a note to five members of the House and Senate leadership with an idea that he has, or something that he thinks they should focus on.

And it’s received well because this is … the grandfather of House Republicans that’s [sic] offering up his wisdom.

You’re going to have a Republican majority in the House. And a Republican majority in the Senate. And all these people who have been so tough and so mean and so nasty are gonna be delivered subpoenas for every document, every conversation, every tweet, every email — because I think it’s clear that these are people who just literally running over the law, pursuing innocent people, causing them to spend thousands and thousands of dollars in legal fees, for no justification.

It’s basically a lynch mob, and unfortunately, the attorney general of the United States [hapless Merrick Garland] has joined that lynch mob and is totally misusing the FBI — and I think when you have a Republican Congress this is all gonna come crashing down, and the wolves are gonna find out that they’re now sheep. And there the ones, I think, that are gonna face a real risk of jail.

Ouch. Newt’s right, of course — but that had to leave a mark.

Gingrich told Business Insider that Republicans should put together a committee of their own, if they regain the majority, “for people who are so despicable that they should not have any legislative jurisdiction.”

Finally, 2022 will not be a redux of the 1994 Republican Revolution, given the Democrats’ steady march to the radical left. Unlike in 1994, Gingrich told Insider he believes it’s important to not only court Republicans but to also attract “non-socialist Democrats and independents because we think it’s very important to build a bipartisan, long-term understanding of what America needs to succeed.”

If Democrats don’t get their asses handed to them in 2022, there are even more people in this country screwed up than I already think there are.

Panic Time: Dems Show Just How Desperate They Are About the Midterms