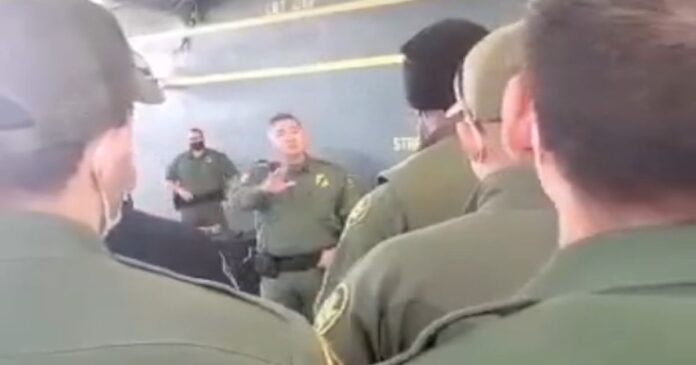 With the situation at the border long past the point of being untenable, the clashes between the rank and file and the Biden officials tasked with leading them are becoming more public.

As RedState reported on Wednesday, Julio Rosas of Townhall obtained leaked audio from a contentious meeting in Yuma, AZ. In it, border patrol agents questioned the leadership of DHS head Alejandro Mayorkas in less than flattering terms, culminating in the following scene.

According to sources present at the meeting and the audio recording, the agent who asked the question then turned his back on Mayorkas.

“Let me just say, you can turn your back on me but I won’t turn my back on you,” Mayorkas said. The agent replied Mayorkas turned his back on the agents first.

That wasn’t the only stop Mayorkas and CBP head Raul Ortiz made, though. They visited other border patrol sectors and things didn’t go any better for them. Now, a leaked video has emerged showing a blistering confrontation between Ortiz and agents in Laredo. Mayorkas was present.

What you see if you watch the video is Ortiz yelling at agents, insisting that they raised their hand and took an oath to do “the job we signed up for.” He claims they must continue to fulfill the mission of the agency, but one agent retorts that they swore to uphold the Constitution. Things devolved from there, with Ortiz growing more upset and forcefully accusing agents of getting bogged down in politics.

From there, multiple agents spoke up, noting that Ortiz is such a partisan figure that he won’t even use the phrase “illegal immigrant.” When pressed, he said “you just said” it while refusing to say it himself, again accusing the agents of getting caught up in semantics. Towards the end of the clip, you hear more complaints about the amount of fentanyl getting across the border.

I don’t see how this situation continues for much longer. You’ve got men who risk their lives to ostensibly keep the border safe and secure and they are being kneecapped by woke partisans in Washington. Biden has put in positions of power over them absolute hacks who refuse to speak up against the administration. Things are deteriorating further, with secret flights taking place to dump illegal immigrants (mostly young, single men) into the interior.

A country can not sustain itself with the rule of law being so ignored and its borders being so flaunted, not just from the outside, but from the highest levels of the domestic government. Right now, the news media and the Biden administration are obsessing over Ukraine’s borders while ignoring the humanitarian crisis occurring on our own. Something has to give, and unfortunately, this may lead to mass resignations by Border Patrol agents.