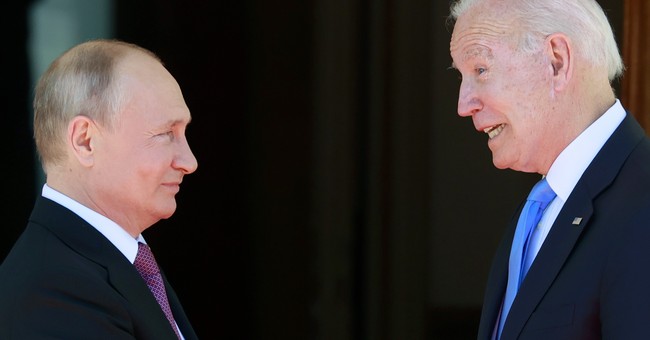 Joe Biden doesn’t seem to know how to deal with the situation between Russia and Ukraine.

Indeed, everything he does just seems to heighten the tension and move the dial more toward war between them.

He threw Ukraine under the bus early on, by waiving sanctions on the Nord Stream 2 pipeline, which helped Russia, increased EU dependence on Russian oil, and hurt the United States and Ukraine.

Then Biden seemed to greenlight aggression with careless words, by saying U.S. troops would be off the table in December and then talking about “minor incursions” not causing a significant response in January, then having to scramble to clean that up.

While he tells us that he threatens the toughest sanctions ever if Russia further invades Ukraine, there are a few problems with this approach. He’s not moving pro-actively to stop Putin first. He’s only threatening sanctions after Putin moves, as opposed to moving sanctions now to back Russia down from their threats. As Ukrainian President Volodymyr Zelensky said, then the sanctions would come too late. “If there’s a full-scale war tomorrow, why do we need sanctions afterward?” he asked. “I don’t think it’s fair.”

The Biden administration is threatening to hit some Russian banks, government-owned companies, and some imports with sanctions, saying that these threatened actions would be more than have been used against Russia in recent years.

But according to the Wall Street Journal:

Off the table, for now, are sanctions on oil and natural gas exports or disconnecting Russia from SWIFT, the basic infrastructure that facilitates financial transactions between banks across the world, said one of the officials.

In other words, the things that would hurt Russia where they lived aren’t being considered. And if we know this, then Russia knows they’re not on the table too.

I don’t get this. Why would you ever advertise that things are off the table, as the Biden team has been doing? That’s basically what he’s doing, if the sanctions he flashes around have no real teeth. We saw how well the nominal sanctions that Obama had in 2014 worked.

There are upsides and downsides to the imposition of sanctions. But the reason Biden may have done it was to kowtow to Germany, which has become dependent on its Russian oil. So, you don’t have all the NATO allies on the same page because Putin has already seduced Germany. If Biden is going to take things off the table, why doesn’t he just advertise to Putin: ‘Hey come on in, the water is fine’? And it was supposed to be President Donald Trump who was the Putin stooge? It’s really Biden who has bent over at every turn for Putin.

Meanwhile, Zelensky said Biden is stoking panic with his characterization of the threat as so imminent. Zelensky insists Biden needs to cool his jets in pushing the fear-porn. While there’s a threat, he says, he doesn’t think it’s as desperate as Biden is painting it ,and Zelensky knows better than Biden what’s happening in his country.

So, Biden needs to re-orient where he is at, get all NATO on the same page, and stand fully behind Ukraine: throw down some significant sanctions now to back them off. That’s what he should do. But he’s Biden, so don’t expect any move that makes sense.