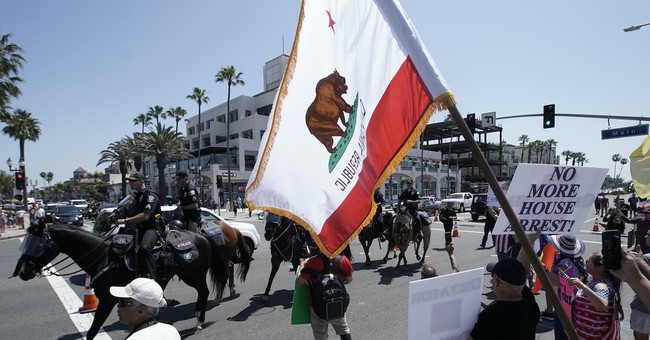 If you’ve ever opened the “Neighborhood” app you know it is a place for people grouped by zip code to inform one another of goings-on in their area, post about services or lost pets, and (most amusingly) gripe at each other for leaving the trash cans out too long or letting their kids run wild.

Lately in my sleepy, southern California suburb, the Neighborhood app has been abuzz with warnings about porch package theft, car thefts, burglaries, and even kidnapping attempts. As the landscape of life worsens in the state, the sharp edges of foolish urban policy have finally begun cutting into the perfected boundaries of Orange County life.

Even our most wealthy, tucked-away communities are seeing an increase in criminal activity, a foreign situation to many in this region who pay exorbitant prices to live a peaceful (if not uneventful) lifestyle. As a family who moved to the area from the inner city, we came to really appreciate the quiet and the safety. You don’t take those things for granted when you’ve lived in a place where the police may or may not come when called, and they’re called nearly every day.

I recently popped in to the app to lurk on some threads and noticed there was a marked uptick in the number of posts about criminal activity. There were about 16 comments — all of them lamenting the crimewave that enveloped all of California and wondering just how we got here (it used to be so safe!) — before one neighbor finally spoke up.

In the interest of privacy (insomuch as it exists anymore), I’ll paraphrase.

Clueless neighbors: Why is there so much crime these days? It never used to be like this! What’s going on??

The One Sensible Neighbor: I can’t believe how many people on this thread don’t know anything about the laws that have been passed in the last 5 years to get us here. Instead, all you just vote for people based on the letter behind their name, but you never do any research to see what they believe, and what plans they have for your area. Do your research, people! Don’t vote based on party, vote based on what candidates support.

The One Sensible Neighbor then launched into a quick rant on the chain of policy efforts in Sacramento that brought us to this point. Prop 47 downgraded many felonies to misdemeanors and then freed those felons who had their charges downgraded on an early release program. It is also state, and in most cities, municipal, law that anyone can steal up to $950 worth of goods a day without prosecution. Yes, you read that right.

Laws that prevent cities from cleaning out homeless encampments in residential areas and in front of businesses and provide access to drug paraphernalia and “safe injection sites” encourage a never-ending influx of homeless addicts and drug dealers. There are only incentives to stay on the streets. There are no policies that de-incentivize criminal vagrancy.

I don’t have the word count to express the insanity, but I did cover it on my podcast, Just Listen to Yourself. Here’s a link, but you can find it anywhere you find podcasts.

I know a lot of conservatives like to criticize our voting habits here in California, and sometimes even cruelly suggest that those of us with good sense who live here don’t deserve relief and don’t deserve to complain, as if we’re somehow part of the problem. The truth is, I don’t think most people in California know anything about the candidates they vote for. Most don’t know what laws are on the books. They don’t care (and I’m not excusing that) because they assume — just as The One Sensible Neighbor noted — that the letter behind the representative’s name is indicative of their character.

That thread on the neighborhood app really made me think. The voting habits of many Californians aren’t based on ideology, but on ignorance. Ask around about Prop 47 and you’ll be shocked to discover how few people know what it is or what it does. Prop 47 is easily the most insidious state law to ever victimize California taxpayers and most people don’t know anything about it.

To my mind, this opens up an opportunity for the GOP. With a recall election on the horizon, Californians have politics front and center for a while. There are an estimated 2 million conservative votes that aren’t cast every year in this state. Most of us feel defeated before we even get to the ballot box, and thus don’t bother. Does that surprise you? Most Californians would be surprised to hear that, too.

California is winnable for Republicans, with effort. Things have never been worse. People of all walks of life are feeling the effects of awful policy, even if they don’t know what the policies are. I think Republicans have a unique opportunity to educate voters here, and piggyback on the dismal sentiment the current governor has inspired in his constituency. There are votes to be peeled off, but even more so, there are “sleeping” votes to be awakened.

Democrats in California have been playing the long game and sinking money into the state forever, and the proof is in the pudding. Why can’t the Republicans employ the same strategy? People are finally listening. Don’t abandon their ears (or their votes) at a time when the electorate is ripe for a shift.

The national GOP and the state party should begin advertising in California. Not necessarily for the party, but for policy. Start running ads explaining the precursor to the PROact, AB5 and how it killed flexible, independent contracting. Explain why Skid Row is 54 blocks and expanding weekly. Explain why housing costs are so out of control. Explain why the roads are crappy, why elite corporations are moving their headquarters to states like Texas and Idaho. Buy ad time on radio, local tv and podcast networks. Explain it like we’re five years old. Flood the zone with messaging…it’s what the Democrats have been doing for decades with obvious, great success.

Infuse some of our local races with much-needed cash from the national party. Send in big names to tour the state, hold rallies, and generate media. Hell, buy some good coverage in the LA Times…Lord knows that’s what the Democrats do.

My point is that voters here for the most part are not malicious; they are simply distracted and ignorant. They vote for things that sound like what a good person would vote for. Who doesn’t want to vote for something called the “Safe Neighborhoods and Schools Act”? Only an evil person doesn’t want safe schools and neighborhoods.

The Safe Neighborhoods and Schools Act, by the way, is Prop 47…the law I just described to you above. Do they sound in any way similar? No, of course not and that’s the point. The GOP needs to begin an organized media blitz blowing up these Democrat strategies that have gone unchallenged for decades.

Get in this game. California is not lost, and in fact, is starving for change. Stop blowing off the voters here and instead target their weaknesses (getting all their political info from headlines). Flood the zone, wrestle the narrative, and be willing to invest in years of strategy — rather than only months. Imagine what would happen to the landscape of presidential politics if California turned purple?

It’s not a pipe dream. The Dems turned us blue with a long-term strategy and media help. There’s no reason Republicans can’t employ the same strategy.

If only they’d be willing to put on their big girl panties and get in this game.