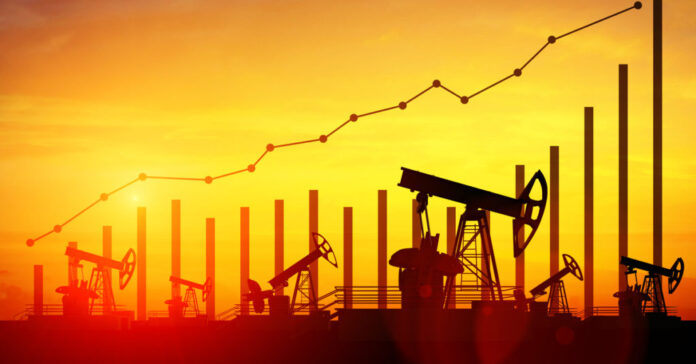 While the White House is touting an economic recovery, Goldman Sachs just reported that oil prices will hit $100 per barrel in 2022.

CNN Business reported that a recent note was written indicating that the investment bank was pointing to what they called “robust fundamentals” in the oil market. They said there was a surprisingly large oil supply deficit, and Goldman Sachs noted that there was a long-term reluctance to invest in oil during the energy transition.

If you look at gas prices from November 2020 to November 2021, you see that the average cost of a gallon went from $2.01 to $3.40. Right now, those around the Biden administration are trying to emphasize the smallest signs of temporary cost decreases.

The Democratic Congressional Campaign Committee released a graph on Twitter that celebrated a two-cent decline in gas prices.

But they provoked ridicule for the Twitter post, which thanked the Commander-in-Chief for cutting gas prices by two cents over the course of two weeks. The graph included in the tweet had a distorted axis, communicating a large price reduction at first glance.

Don Lemon, from CNN, boasted about the fact that gas prices fell by about $0.09 from a month ago. He said that this decrease was a “big economic relief for millions of Americans who have been dealing with soaring energy prices. Cost at the pump, finally easing up. With the national average for a gallon of regular falling to $3.35. The lowest since October. Just look at that.”

Larry Fink, a chief executive with BlackRock, asked policymakers to create a fair and just green economy. He believes we could do this by building up renewable energy sources like those highlighted by CNN Business. Fink said that any play that only cut the supply of fossil fuels but did not increase demand for green energy was insufficient. Fink noted that this would just drive up energy prices for those who could least afford it. And this would also result in a greater polarization around the ideas of climate change.

In spite of this advice from BlackRock, there is now a proposal from California that seeks to increase fees for residential solar energy consumption. California has a reputation for favoring renewable energy. So now, the California Public Utilities Commission is suggesting a policy that would “evolve decarbonization incentive efforts to meet the state’s groundbreaking clean energy goals.” This would also create a grid participation charge of $8 per kilowatt for residential solar panel users.

Elon Musk, the CEO of Tesla, called the decision by California “bizarre.” He encouraged people to send complaints to the governor of California, Gavin Newsom, and he set up a website for the public to do so. Tesla also asked citizens to call the Democratic governor’s office, make verbal comments at the upcoming CPUC meetings, and send tweets with the hashtag #SaveSolar.

The state of California is considering a constitutional amendment that would begin a universal, single-payer healthcare system. If this gets into place, it will mean a tax increase of $12,250 per household. That would double the state’s already high tax collections, according to the Tax Foundation. While not directly related to oil, it does mean that it’s even more for people to have to pay out.

So no matter what you are hearing from the White House or California, get ready to pay even more money out of pocket in 2022, especially at the fuel pumps.