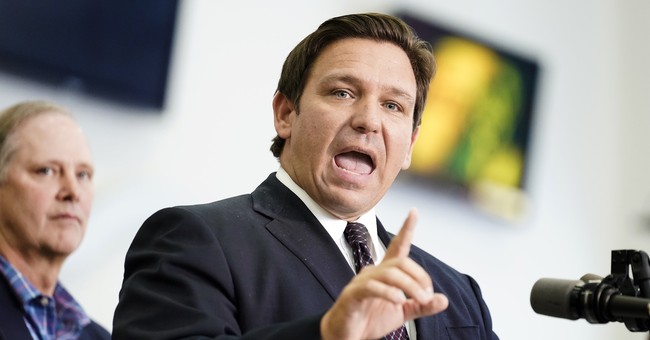 It was very strange yesterday to see Biden’s FDA revoke the emergency use authorizations on monoclonal antibody treatments. They cited no studies or evidence in their decision and left it up to various media outlets to do damage control for them, and Jen Psaki did just an awful job of making the case for the FDA, essentially accusing Florida Governor Ron DeSantis of being an anti-vaxx nut.

In their defense of the FDA’s decision (see above), the Washington Post compared the pushback from conservatives to ivermectin and hydroxychloroquine, which is an absolutely nonsensical comparison given that the FDA itself issued an EUA for the monoclonal treatments and not the other two. It was working as expected.

The problem is that it was less effective against the omicron variant, according to some studies, but omicron is not putting people in the hospital at the same rate the still-very-active delta variant is. It was so effective that the federal government bought up those treatments and distributed them to other states (and restricted distributions to Florida for reasons of “equity”) only to now throw it by the wayside.

The monoclonal antibody treatment means that if you get COVID-19 there is a pretty good chance that you can recover more quickly. It was a failsafe for those who didn’t get the vaccine or booster. But the Biden Administration is all-in on getting as many people as possible to take the vaccines, so having a non-vaccine alternative is simply unacceptable. This was an entirely political decision, and it was one that will cost people valuable healthcare options.

Florida announced that 2000 of its residents on Tuesday alone had their appointments canceled and that clinics offering the treatment would have to be shuttered because they wouldn’t be able to provide it to anyone. Understandably, Governor Ron DeSantis was furious. He spent a lot of time both promoting the vaccines and getting these treatment facilities open so that residents of his state would have the ability to fight the virus before and after infection.

But he is being accused now of pushing “pseudoscience” where there is none. Delta is still out there (just look at Illinois, for example) and is still a very serious variant. Omicron isn’t hospitalizing people at near the rate its predecessor still is, and that is not likely to change anytime soon.

This move, however, seems to be a subtle admission that Democrats think Florida is off the table for 2022 and 2024. Not only is it bad healthcare policy and bad political maneuvering, but it’s also insanely irresponsible campaign strategy.

If the Biden administration is so willing to keep thousands of Floridians from getting a certain healthcare treatment for political reasons, then they are obviously not worried about their electoral chances there. Nikki Fried and Charlier Crist can shut their gubernatorial campaigns down now. Val Demmings can stop running against Marco Rubio. It’s over for those races. Whatever shot they may have had this year has been torn away from them.

If you want your party to be successful in a purple state, you do what you can to get those people on your side. What you don’t do is strip thousands of them, most of whom probably have several family members who will be just as upset about it as they are, of this treatment going away. And it’s very clearly the federal government depriving them of this treatment, not the state government. That kind of thing is sure to push voters toward the other side of the political aisle.

So unless the Biden team doesn’t think this will affect voter perceptions (granted, that is an entirely plausible reality), this is basically an admission that they don’t think there is anything they can do to win Florida back in the immediate future. They’ve written off Florida for 2022 and 2024.

They are so insanely bad at politics. I don’t even know how they can be this bad at it. But they are.