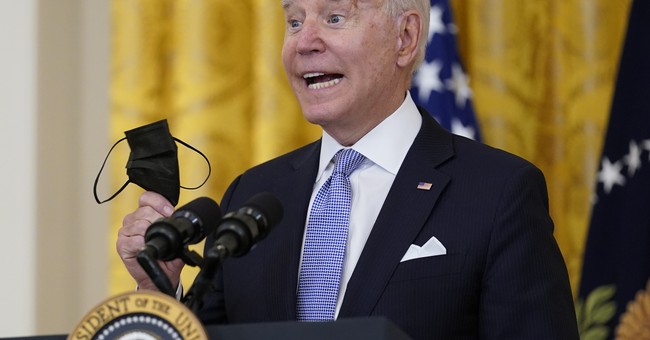 As we reported earlier, Joe Biden got caught on another hot mic. This time, he was caught calling Fox’s Peter Doocy a “son of a b**ch.” Doocy had asked him a question about inflation which was, in part, the subject of the meeting that Biden had just conducted. But Biden wasn’t interested in addressing the subject, despite polls showing this is one of the most important concerns for Americans who are being crushed by the rising prices.

It was immediately the talk of the internet. The problem wasn’t just that Biden was being nasty, using a curse word and trying to diminish press who dares question him. It’s also that he doesn’t have the basic judgment left to understand it will be picked up on the mic and come back to bite him. This was the second time in the past week where he attacked a reporter, also striking out at Fox’s Jacqui Heinrich, calling her question about being reactive to Putin a “stupid question.”

Of course, this was a lie, as so much with Biden is. Or he would have to fire himself, at this point.

He showed throughout his campaign what a nasty person he was any time he was challenged, even attacking potential voters and calling them names, insulting their weight, even threatening to take one man outside.

“Look, fat, here’s the deal,” Biden said to this man who dared to ask him about Hunter Biden’s actions. He even challenged the man to a push-up contest and called him a liar.

Then there was the “dog-faced pony soldier” comment to a woman. I’m still not even sure what that comment means.

Perhaps the worst one — and there were a lot so, admittedly, it’s hard to say — was when Biden was challenged on guns by a voter who knew far more on the subject than did Biden. Joe realized that and that infuriated him. Biden made a couple of ridiculous comments that showed he doesn’t understand the law or guns including calling an AR-15 an “AR-14.” He then called the man a liar, told him he was “full of sh**,” threatened him, and said he should “take him outside.” He also said you’re not allowed to own any weapon, then “I’m not taking your gun away, at all.” Huh? The man even has to correct Biden to tell him that it is “not ok” that Biden is sticking his finger in his face.

Peter Doocy’s response was great, as we reported, dealing with Biden with great humor. You know Jim Acosta would have melted down and been furious if it were Trump.

But how did the liberal media, who criticized President Donald Trump for being “mean” to the press, react to this nasty comment today? Did they bring up Biden’s prior promises or try to hold him accountable, or even take on Biden for bad treatment of the press?

As we noted earlier, on the contrary, they stood more with Biden than with Doocy. People like CNN’s Brian Stelter retweeted things like this from a TV critic.

Let’s compare and contrast that with what Stelter said about Trump.

MSNBC’s Chris Hayes laughed and thought it was funny. You know if it had been Trump he would have gone all-in on the criticism.

CNN’s Kaitlan Collins and Stelter used the term “deadpanned,” suggesting that it was a joke. It wasn’t a joke. Can we scream “misinformation” at Brian Stelter? Wasn’t he just talking to kids about that the other day?

This just shows, once again, how empty their criticism was of Trump. The real Biden shows his face. Yet they cheer Biden for the very things over which they attacked Trump. If they didn’t have double standards, they’d have no standards at all. Oh, and look — they don’t. And they wonder why they have absolutely no credibility?