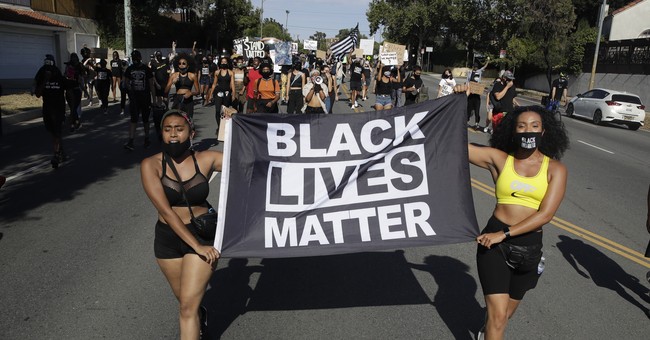 If people thought the aggression of Black Lives Matter couldn’t happen in a red state like Texas, they were wrong. A new, viral video shows BLM protesters blocking traffic and brandishing guns in an attempt to intimidate those trying to get through in Plano, TX.

As a note for accuracy about who these protesters actually are, multiple Black Lives Matter shirts are visible. The signs being held up also indicate their allegiances.

Here’s the video of the incident.

At one point, you can see one of the protesters point a gun at the man who is yelling at them to move out of the road. But it’s what the police do that really has people talking.

Instead of trying to clear the street, the officer just stands there and only gets involved to deal with the driver. While it’s obvious he’s trying to keep things from escalating, that’s no excuse to stand idly by when unlawful behavior is clearly happening.

In response to this video, I’ve seen several BLM supporters claim that the protesters have a right to be armed. That’s true, but pretending anything in that video is legal shows a fundamental misunderstanding of how open carry (or any carry of a firearm) works. One of the things that a firearms instructor will drill into you is that you can not instigate a confrontation and then finish it with a gun while claiming self-defense. In this case, you can’t block traffic, entrap people, and then threaten them with a firearm. You certainly can’t shoot anyone in that situation. Once you instigate a confrontation as the BLM protesters did, the legal hurdles to claim self-defense become massively high.

Further, I want to note that there is no situation in Texas where a protest can legally block a roadway. Even if this protest was originally permitted, it had reached the point of law-breaking by the time the camera started rolling. Police should have moved to clear the road to de-escalate the situation. Instead, nothing was done until motorists started to get into it with protesters. That’s a failure of the police to do their jobs, likely due to restrictions placed on them further up the food chain.

This kind of lawless mob behavior is not just limited to urban centers. Plano is an affluent, Dallas suburb. If local authorities don’t get control, things are going to get out of hand, and people are going to die.