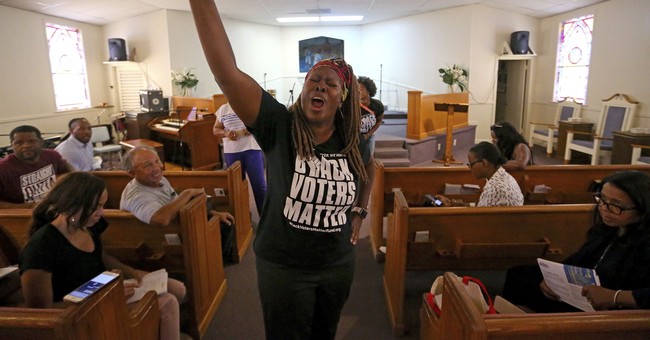 “If you have a problem figuring out whether you’re for me or Trump, then you ain’t black” ~ Joe Biden, May 22, 2020. Biden later apologized for the comment after causing a firestorm, saying “I shouldn’t have been such a wise guy,” but his meaning was crystal clear: If you’re Black, you automatically vote Democrat.

As recounted by Breitbart, Biden’s 2020 presidential primary campaign was sucking mud after finishing fifth in New Hampshire and fourth in Iowa, but Biden being Biden, he advised skeptics, including those who had already stuck a fork in him, to withhold judgment until a primary in a state with a large pool of Black voters, which he assured all doubters he would win. South Carolina would be that state.

Biden won the nomination and went on the win the White House. (Miller gets thrown under the bus in the comments section in 3…2…1…) Now, one year later, the question is yuuge: How did Biden do in his first year as the occupant of the Oval Office? Specifically, in the eyes of Black voters?

First things first — all voters. As we reported on Sunday, after just one year of Biden and his policies, 72 percent of Americans think the country is headed in the wrong direction. That is astounding.

Why it’s almost like Biden tried to mess up the country. Wait–

Biden’s approval ratings continue to freefall, swirling down the liberal toilet at least as fast as CNN’s ratings, prompting my colleague Jeff Charles on Friday to ask: Does Biden even care about the midterms?

And Black voters, specifically? In a recent Associated Press-NORC Center for Public Affairs Research poll, as reported by ABC News, just six in 10 Black Americans said they approved of Biden’s job performance, down significantly from about nine in 10 who approved in polls conducted through the first six months of Biden’s miserable presidency.

George Hart, a professor and faculty advisor to the student chapter of the NAACP at Benedict College, a historically Black institution in Columbia, told ABC News he was both disillusioned and angry by Biden.

I’m perplexed. At some points, I’m angry. I’m trying to see if there is anything redeeming. I’m just so disillusioned, I don’t know what to say.

And why shouldn’t Hart — or any Black American — be angry and disillusioned by a Democrat president and his party? Beginning with Lyndon B. Johnson’s disastrous “War on Poverty” in 1964, according to The Heritage Foundation in 2014, U.S. taxpayers had at that point spent $22 trillion on Johnson’s war. Adjusted for inflation, that’s three times the cost of all military wars since the American Revolution.

For a decade-and-a-half before the War on Poverty began, noted Heritage, self-sufficiency in America improved dramatically. But for 45 years prior to the Heritage report, there had been no improvement at all. Many groups had become less capable of self-support than when Johnson’s war started.

As I reported in early December, 12 U.S. cities blew away their annual murder records in 2021 with nearly a month to spare — and those 12 cities all have one thing in common: They are run by Democrats.

Black-on-black murder in the afore referenced cities and elsewhere continues to skyrocket, with no end in sight, yet what did we hear from multiple Democrat city governments in the aftermath of the George Floyd “peaceful protests”? Support for Defund the Police insanity. How’d that all work out, from Minneapolis to Los Angeles to New York City and beyond?

And where was — and remains — Biden?

Professor Hart, who supported Biden in the South Carolina primary, also became concerned about the usurper’s radical leftism from his first day in the White House.

He let so much happen from the time he became president to the time that he actually introduced the measure, it was lost. And we are the ones, African Americans, Black voters, who are going to pay the penalties.

Dennis Brothers, a 31-year-old media specialist in South Carolina, told Breitbart he supported Biden “from the beginning,” but soon became frustrated by the president’s failure to honor his campaign promises.

That has been a disappointment. I just hope that some of those promises that were made are kept. We know that Rome was not built in a day, [and] I’m not going to say he’s not trying, but I just wish he would try a little bit harder.

Travis Lincoln, who attended Biden’s first South Carolina rally in 2019 and even deejayed a later campaign event, began to see through Biden soon after he was inaugurated, according to Breitbart.

His campaign sold us on the idea that he was going to support some Black issues, and that’s not really happened. The people that were in his corner thought that was going to be the best move for him. It was more political strategy than anything.

And Ra Sh?d Frazier-Gaines, who co-founded Amplify Action, a nonprofit that focuses on the political engagement of Black men, went bottom-line on Biden — bigly.

Black people are the reason Joe Biden is president, and I don’t feel … that there has been one time that he’s ever shown us a ‘thank you’ by way of policy. Yes, his administration has given a lot of talented Black people opportunities to serve in different positions.

All of that is cute, but that’s not doing anything to put food on the tables of Black families across the country.

Ironically, the above Biden supporters-turned-critics were willing victims — awakened though they appear to be — of the same strategy and tactics employed against Black voters by the Democrat Party for nearly 60 years, beginning with LBJ’s War on Poverty.

Election after election, decade after decade, Democrat politicians have exploited the ever-loving daylights out of Black America, promising this and pandering about that, only to fail to deliver — and in innumerable cases, making things worse for Blacks.

Yet? Black voters have continued to overwhelmingly pull the “D” lever, no questions asked, no issues raised — and have dutifully been lied to and sold short every time. Even worse, perhaps, Democrats have masterfully convinced disillusioned Blacks that “while we might not have delivered everything we’ve promised, just think how worse off you’d be if you didn’t have us to protect you from the (racist) Republicans.”

But is the Democrat lock on Black voters finally beginning to give way to reality? To the reality of the Big Democrat Lie? Are Blacks like George Hart, Dennis Brothers, Travis Lincoln, and Ra Sh?d Frazier-Gaines simply outliers — or are they awakened indicators of a change long overdue in Black America?

Let us hope, the latter. Not only for Black Americans but for all Americans.

Biden said it best in 2020 without knowing what he was really saying: “Sure, I’ve sucked among all voters but when I can rely on Black voters to carry me to victory, I’m gold.” The “Then you ain’t Black” mentality. Not only exploited by Joe Biden — but also exploited by the entire Democrat Party for six decades.

Yes, Joe Biden might very well be the hypocritical straw that broke the pandering Democrat camel’s back.

Memo to Democrat Party: Hispanic Voters Are Abandoning You in Droves and Now We Know Why