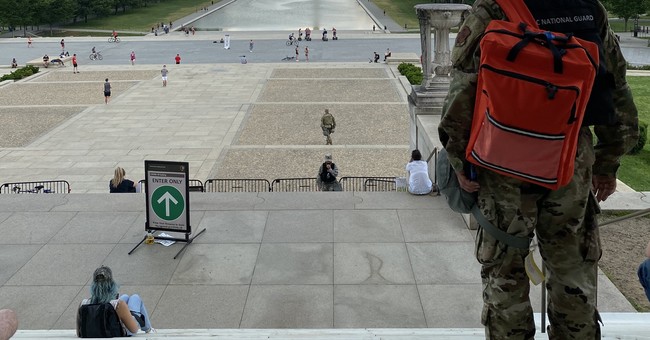 We reported earlier on the anti-COVID mandate rally that was being held in Washington, D.C. Thousands of people came out who represented all political persuasions. Among the speakers were Dr. Robert Malone, journalist Lara Logan, and Robert F. Kennedy Jr. Some 20,000 were anticipated, many of them federal workers who were against the mandate on them.

There were a few anti-anti-mandate folks who showed up, including a couple who seemed to belong to the cult of Dr. Anthony Fauci.

They chanted, “We love Fauci” and “Quack, Quack” — not seeming to realize how well those two things go together.

But they were relatively mild compared to the liberal who lost it on the rally-goers in the middle of the street near the rally. This is some kind of epic meltdown, on par with that person who infamously screamed after Trump won.

“My tax dollars are going to the police, to shut down the road, so that these f**king white supremacists can party and have a hell of a time celebrating their loser President,” exclaimed the woman, who then stomped her feet and made an “L” shape over her head.

“Go the f**k home. Stop invading our territory,” she continued.

This is your brain on liberalism. It comes under the heading of ‘everyone who upsets me is a white supremacist,’ whether there’s any reality to it or not. She’s absorbed her liberal talking points well. Someone has to share with Robert F. Kennedy Jr. that he’s a white supremacist now. While there certainly were Trump supporters in great evidence, the rally was all political persuasions and it wasn’t a “celebration” of Trump. It was a celebration of freedom. By the way, where is this lady’s mask, as she stands there screaming and spewing at people?

One of the funniest things was the last part: “Stop invading our territory!”

Um, since when is it just “your” territory, lady? Washington, D.C., is our nation’s capital; it belongs to us all. We certainly pay enough in taxes to keep it afloat. Despite what she thinks, it doesn’t belong to the liberals — even though, yes, the area certainly has a lot of entitled ones just like her.

This lady apparently didn’t take White House Press Secretary Jen Psaki’s advice to relax, do kickboxing, and have a margarita.

But I have to say the thing that I love is the little smirk of the other lady holding a drink, as she walks away from the woman.