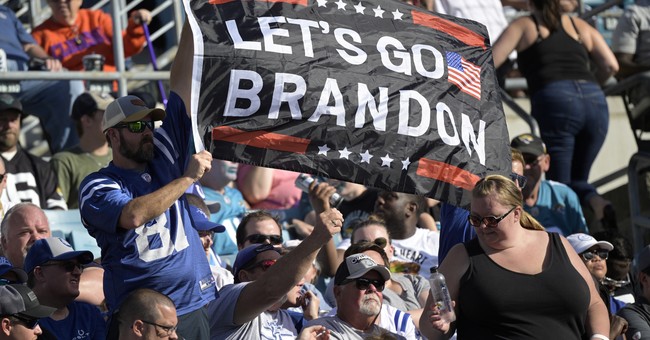 MeidasTouch is an anti-Trump, anti-GOP hysterical PR operation that’s not particularly good at its job.

They prove that with their latest effort. One of the basic rules of PR is don’t highlight your opponent’s attack on you.

Yet they just did that with a sloppy, confusing ad that they just put out, trying to spin the “Let’s go, Brandon” saying into a positive.

First, it’s badly done, so you can’t tell it’s supposed to be positive. The sound quality of his remarks is also off, plus the listing of things to match the letters of “Let’s go, Brandon” is also a reach.

When you’re getting mocked by people like actor and journalist Ben Dreyfuss (yes, Richard Dreyfuss’ son), you know it hasn’t gone over well.

Most people watching it will probably assume it’s a parody, meant to mock Biden, especially since it’s running on Fox. So good job there, guys, you’re hurting your guy. If people don’t know what it means, and many don’t, then it will be explained to them, and that hurts Biden. Then, if people on the left are trying to attack people saying “Let’s go, Brandon,” claiming they’re saying a curse word, MeidasTouch just blunted that argument by putting it in an ad. Oops, can’t make that claim anymore. Not to mention they paid money to Fox to run this. Once more, great job, guys! According to CNN and MSNBC talking heads, the saying even borders on “insurrection,” so better watch out there, Meidas, lest they start using the “I” word with you!

What’s funny on top of all that is that they think it’s some kind of great success that they got it on Fox because apparently none of these geniuses even looked at their work and thought ahead about what it was going to look like, or how it would be taken.

The greater problem, of course, is that Biden hasn’t been successful, so trying to paint him as the “jobs” guy isn’t going to fly — people aren’t buying it. Polls show that Americans don’t regard him as successful on any level, particularly not when it comes to the economy.

If someone is paying money for this ad, they should get their money back.