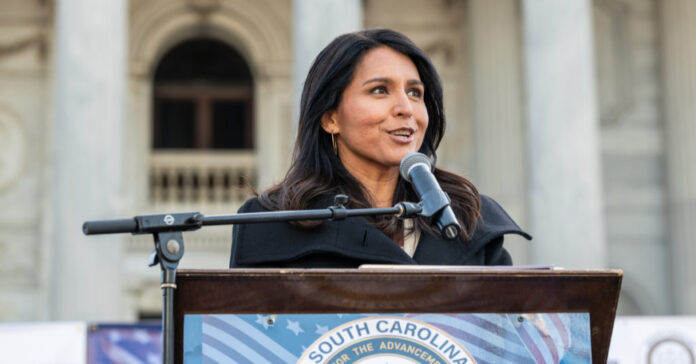 One of the most awe-inspiring feats of political life is how quickly people switch positions on other people or crucial issues. Like 4th grade girls at recess, they will go from being completely against a candidate to believing in them after they lost to them. Especially when you are Kamala Harris and you get to become Vice President after taking the Lewinski route into higher office and then politics.

Former Presidential candidate Tulsi Gabbard has done a total spin. First, she was against President Biden while they fought it out on the presidential primary, but she, then, issued a statement of support back in March of 2020 after she had fallen out of the race. “I know Vice President Biden and his wife and am grateful to have called his son Beau, who also served in the National Guard, a friend…Although I may not agree with the Vice President on every issue, I know that he has a good heart and is motivated by his love for our country and the American people.”

These statements haven’t aged well. While it’s humorous that she omitted saying anything about the taxpayer drain Hunter, she is finding herself asking for the ketchup to make it easier to eat these words less than two years later. Then again, it’s possible her comments this past Friday are being issued to make it easier to choke those words down.

“I supported Joe Biden, and millions of other Americans voted for Joe Biden because he promised to unite us, bring us together to end the divisiveness. Sadly, not only has he failed to do this, he has betrayed us all by pouring fuel on the fires of divisiveness that are tearing our country apart… Biden compares those who disagree with him to racist traitors, to enemies of bygone eras, and Biden now has his attorney general targeting millions of Americans as domestic terrorists.”

This abrupt turn in position isn’t surprising. President Biden has been taking every opportunity to sow the seeds of division even deeper into the American culture, so why wouldn’t his past rivals or current ones do the same? Gabbard has had a chance to see President Biden in a way most Americans never do. She has spent at least some real-time with the man and knows what he is capable of and what he is trying to do to America.

We see the tangible results of his presidency. It’s all pretty clear that he has done as little as possible to fix the problems in the country, and how far he will go to skirt being responsible for anything. He has proven time and again exactly how unreliable, and unpredictable he can be. It’s like he’s brand new to responsibility and politics.

The problem is he’s not a boot (military term for someone fresh out of boot camp). He’s been around politics since 1973. Isn’t nearly 50 years enough time to learn how to bring about unity within the American political landscape? Instead, he just tries to sell us out for the left-wing progressive agenda, and acts like conservatives are the cause of all the problems.

Dividing the people is a guaranteed way to ensure nothing gets done. It just serves to ensure more conflict and chaos within our borders. We learned after 9/11 that this is a country that best works with unity, and a common message. The terror the events of that day brought out the best in Americans and ensured we had a common enemy. Since then, we have focused that attention back inside our own borders and against one another. It has served to do nothing positive for the country, and it has gotten ten times worse under President Biden.