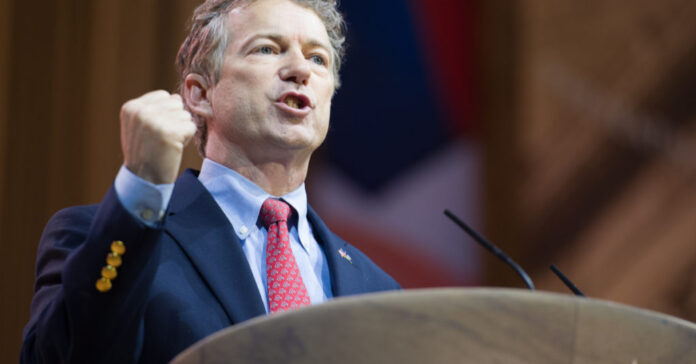 Things are getting heated so frequently on Capitol Hill, turning what used to be a climactic, heated event, into your average Tuesday when it comes to Sen. Rand Paul (R-Ky.) and Dr. Anthony Fauci.

Fauci claimed Paul sicked his supporters on him while using Paul’s “Fire Fauci” campaign as an example of why his followers might be encouraged to cause harm to him and his family with threats and harassment to the well-known “authority” on COVID-19.

He claims he is in danger and Paul is always attacking him. And it just doesn’t matter what he does; it’s always the same story.

While keeping his composure, it was quite evident that Paul became increasingly agitated as Fauci deflected, as he does anytime anyone questions him or his sanctimonious approach to the virus, accusing Paul of distorting everything about him.

Paul fired back at White House’s chief medical adviser claiming he has conspired in attempts to discredit scientists that don’t agree with his approach to COVID-19.

Paul said, “Dr. Fauci, the idea that a government official like yourself would claim unilaterally to represent science and that any criticism of you is criticism of science itself is quite dangerous. Central planning, whether it be of the economy or of science, is risky because of the fallibility of the planner.”

Paul claimed Fauci was a government official who “rules by mandate” and Fauci’s errors have caused harm to millions of Americans.

As Paul read from an email sent by the former National Institutes of Health director Francis Collins, the health director ordered Fauci to execute a “quick and devastating takedown” while calling for “focused protection” for those more vulnerable to COVID-19.

After a few cringy minutes went by as they talked over one another, growing more frustrated by the second, Fauci kept redirecting, refusing to answer the burning questions most Americans have been asking themselves for years now.

Fauci kept repeating that Paul is always using personal attacks against him and he claims “They have no relevance to reality.”

Fauci argued stating that all of his recommendations have been in support of the CDC guidelines, which state, for the American people to “wear a mask, and get boosted.”

Fauci added, he would like to clear a few things up for the committee, saying Paul was just doing this for political reasons when the committee chairwoman finally interrupted the two, bringing the back-and-forth to a halt.

Fauci protested Paul’s behavior, reminding those in attendance that at the last hearing, Paul insisted he was “responsible for the death of 4 to 5 million people, which is really irresponsible.”

“What happens when he gets out and accuses me of things that are completely untrue is that all of the sudden that kindles the crazies out there, and I have threats upon my life, harassment of my family, and my children with obscene phone calls because people are lying about me,” Fauci said.

Paul conveyed how disappointing it is that the people who question you are painted as making threats toward you or your family. He, then, began to describe his experience of how he was actually a victim of violent attacks made at the 2017 Congressional Baseball Shooting.

The Kentucky senator added, “For you to somehow suggest that somehow I or people who dare to oppose you are responsible for threats, that’s insulting. The person who shot at us and almost killed [Rep. Steve Scalise (R-La.)] was a rabid supporter of Bernie Sanders. But the one thing you’ll find if you look at the record is that not one of us accused Bernie Sanders of being responsible for that. So this is the kind of ignorant sort of personal attacks that you engaged in. You engaged in these attacks with fellow scientists.”

The American people just want real answers without all the deflection. Is it really too much to ask? Who knew a man holding another man’s feet to the fire could be so comforting.