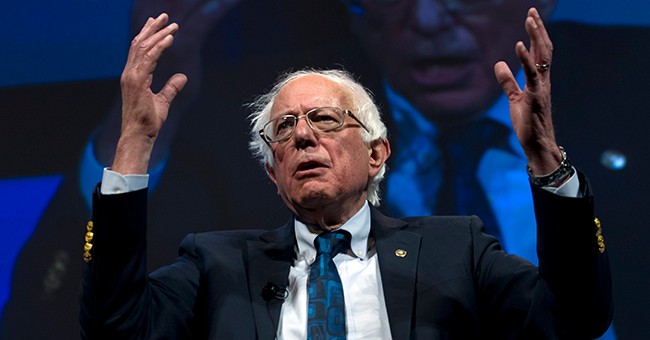 The latest fallout from the Democrats in charge of the Senate coming on the heels of Joe Bidens’ first year in office is this: Our favorite curmudgeon from Vermont is endorsing the idea that two of his colleagues in the Senate should face a primary challenge. Senators Kyrsten Sinema of Arizona and Joe Manchin of West Virginia, both Democrats, have earned the wrath of Sen. Cranky Pants because they are not willing to blow up the filibuster in the Senate.

Sanders, of course, is NOT a registered Democrat but caucuses with them because the Senate currently does not have a crazy caucus for “independents” as of this writing. However, give Chuck Schumer a moment and he might come up with that idea.

“Anybody who believes in American democracy has got to vote to enable us to go forward with 50 votes to suspend the filibuster, at least on this vote,” he said.

Democrats are looking for a filibuster carveout to pass two Democratic-backed voting bills with a simple majority instead of the 60 votes needed to avoid a filibuster. Manchin and Sinema have both said they support the bills but will not back a change to Senate rules to pass the legislation.

Sanders said that there is a “good chance” opponents of changing the filibuster could face primary challenges but noted that their fate ultimately lies in the hands of their constituents.

And when asked whether he would support primary challengers to lawmakers wishing to keep current Senate rules in place, he said, “Yeah, I would.”

Now let me point out a couple of things that struck me here.

First off is this little nugget from Bernie that I find super interesting.

Anybody who believes in American democracy has got to vote to enable us to go forward with 50 votes to suspend the filibuster, at least on this vote

I have highlighted the needle they are trying to thread here. They know damn well it is looking like the GOP is going to take over Congress next year so they only want to suspend the filibuster for THIS ISSUE and this one alone. The Democrats know that they will need the filibuster at some point and will be thankful that they have it, yet they really want this voting package passed.

This brings me to my second observation. Why?

Did these election reforms that they claim are needed so badly prevent Joe Biden from getting elected last year? Was there a rash of people being prevented from voting due to race or some other issue that progressives, like Bernie, constantly complain about? Biden only scored 81 million votes in 2020. In comparison, his pal Barrack Obama in 2008 racked up almost 70 million votes.

Let that sink in and marinate for a minute.

Biden is taking some heat for comments he made to the New York Observer, in which he said of Sen. Barack Obama, D-Ill., a rival for the nomination: “I mean, you got the first mainstream African-American who is articulate and bright and clean and a nice-looking guy. I mean, that’s a storybook, man.”

So the “first mainstream African-American who is articulate and bright and clean and a nice-looking guy” received 11 million fewer votes than the doddering old fella with Puddin for brains who hardly left his basement during last year’s campaign. Yet we have a voting crisis akin to the ’40s ’50s and ’60s?

That is the story you are going with?

If the Democrat Party is to survive, they need to move a bit to the center, and good ole Bernie attacking Manchin and Sinema is just about the dumbest thing you could do. However, far be it from me to discourage this so I will sit on the sidelines with the popcorn and raisinets and watch this party implode.

Don’t be afraid to join me, I promise it will be a blast to watch!!