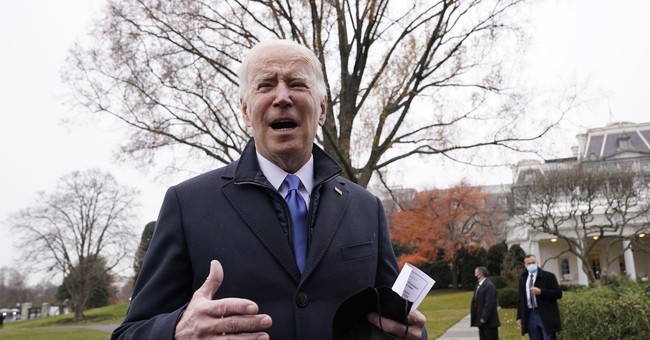 In this episode of “Stupid Crap Joe Biden Says”…

Only hapless Joe Biden could take a tense, hours-long hostage situation at a synagogue and make himself look even worse by “virtue” of the stupid crap he says about it. Yup, that’s our president. (Yes, as was the case with Donald Trump and the TDS-riddled left, Joe Biden, unfortunately, is “my” president.)

As reported by my colleague Nick Arama on Sunday, Biden kicked off the hapless festivities right out of the gate by issuing a pathetic statement that made headlines because of what he didn’t say vs. what he said. The occupant of the White House apparently had a hell of a time trying to figure out the motivation of the hostage-taker, Malik Faisal Akram, who was ultimately shot and killed by law enforcement officers.

Now, one might think that a radicalized Islamist, professing to be the brother of imprisoned Aafia Siddiqui, known as “Lady al Qaeda” — the claim was later proved false — taking Jewish hostages inside a synagogue, most likely had an easily recognizable motivating factor for doing so, but not Joe. Nope, as far as Joe was concerned, the jury was still out. Way out.

“There is more we will learn in the days ahead about the hostage-taker,” said Sherlock Biden.

But — and God knows how many times have we seen it over the last year — Joe wasn’t finished making a fool out of himself. Not even close, as reported by Business Insider. Predictably, as Nick noted, Biden suggested Faisal Akram bought the handgun “on the street.” The question is why? The answer is easy — but we’ll get there in a minute.

As we’ve seen from the Democrat Party since at least the early days of the Chicago Jesus Obama administration, every time a high-profile crime is committed in which a firearm is used — mass school shootings are “ideal” for this purpose — Democrats pull hamstrings rushing to TV cameras to blame the “guilty” firearm and promptly demand stricter gun-control laws. Joe didn’t disappoint on Sunday — and then some.

[H]e — apparently, he spent the first night in a homeless shelter. I don’t have all the detail yet, so I’m reluctant to go into more — much more detail.

But — and, allegedly, he purchased it on the street. Now what that means, I don’t know.

Whether he purchased it from an individual in a homeless shelter or a homeless community, or whether — because that’s where he said he was…

Completely devoid of facts, our intrepid president suggests the hostage-taker bought the gun “on the street, perhaps from an individual in a homeless shelter.” The why, of course, was because Biden’s wild speculation perfectly aligns with the left’s gun-grabber narrative.

By doing their insidious damnedest to take away our “assault rifles,” “weapons of war,” murderous handguns, and stuff. Democrats. It’s what they do.

Other Democrat gun-grabber efforts, as previously reported by RedState:

The Definitive Debunking of the Gun Control Movement’s Lies