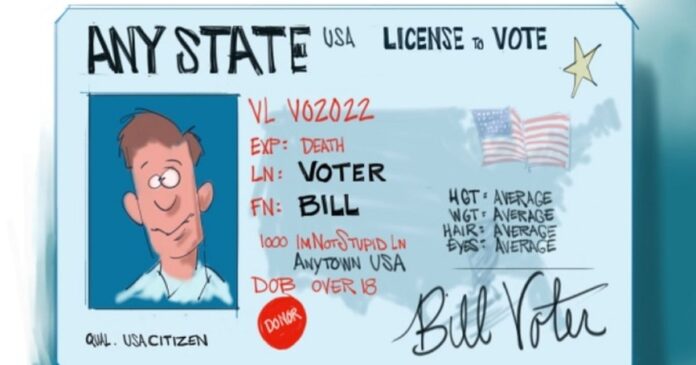 WASHINGTON DC: In the nation’s capital, every citizen must carry their papers in public. No vax, no photo ID, no mask? No soup for you! But requiring an ID to vote? Nope. According to D.C. Mayor Bowser and every harpy Democrat on Capitol Hill, that’s racist voter suppression. Never mind that a vast majority of normal voters and Democrats think an ID to vote makes perfect sense, Democrat mayors and their Capitol Hill counterparts disagree. Shut up, general public, your betters, know better. And Democrats have plenty of willing partners to gaslight America for them. All Joe, Chuck, and Nancy need to do is ask the media to jump, and willing media will ask is how high.

10 years ago, the AP ran a story about how hard ID voting laws were on the commoners.

To convince whites that it wasn’t just poor blacks who had difficulty voting, AP found a couple that AP claimed were old white Republicans but even they were denied their right to vote because, evil [racist] voting rules. The original AP story, titled “Legitimate Voters Blocked by Photo ID Laws” was carried widely in America’s newspapers. AP’s Mike Baker reported that in 2012, Indiana residents Edward and Mary Weidenbener wanted to vote, but when they showed up to vote, darn it, they were turned away. No ID, NO VOTE FOR YOU!

Ed was quoted as saying:

“A lot of people don’t have a photo ID. They’ll be automatically disenfranchised,”

Poor Ed, poor Mary, they had no idea that you needed ID to vote. Gosh, that sounds terrible. Maybe it’s more common that adults don’t have IDs, right? Indiana’s Secretary of State looked into it. Poor Ed, poor Mary, let’s get them IDs so they can vote, thought the secretary.

No need – the story was bogus. Indiana’s voter ID law had been in place for 6 years — Ed and Mary had voted before. They both had State issued IDs — and passports, too. Ed and Mary lived in a retirement home, and their polling location was right next to the dining room. They could have walked home, gotten their IDs, and returned before the next bingo number was called. They didn’t bother. And because Ed and Mary were well over 65, Indiana would have allowed absentee ballots without ID. Oops. If you’re wondering what Baker got right, he spelled Indiana correctly.

The media have run stories like the Weidenbeners’ for years. They start with a conclusion, then find “experts,” witnesses, or evidence to support the conclusion. They willingly carry water for Democrats. That’s not new, nor is it news. CNN, MSNBC, Washington Post, New York Times, have pushed the lie that voting laws as simple as asking someone in the 21st century to have ID to vote are racist.

Joe Biden hasn’t helped his cause. He launched into a deranged finger-wagging rant in Georgia, labeling all who want voters to show ID as confederates or Bull Connor reincarnated. The left will continue to bellow about “racist” voter laws when the majority of voters think rules to vote make sense.

I’d love to see basic knowledge of government as a prerequisite to vote but that will never happen. Democrats squeal over ID, so asking voters to know more than “orange man bad” is a bridge too far. Democrats don’t want voters thinking. Democrats want votes harvested like crops of corn. As long as the vote keeps them in power, Democrats don’t care if a voter is no more informed than a head of corn.

If you were wondering what happened to AP’s research-challenged Mike Baker, he’s no longer with AP. He’s now with the New York Times.