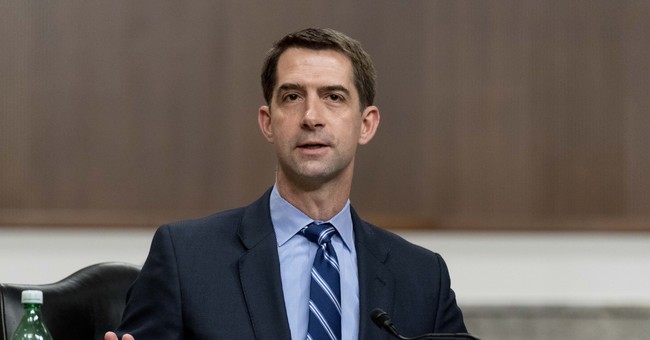 Sometimes you wonder what gets people started on dumb conspiracy theories. Things that make you go “Hmmm…”

But when I saw Sen. Tom Cotton (R-AR) trending on Twitter along with “Greenland,” I knew that we were in for something from the left that was truly dumb — while being hilarious at the same time.

I was not disappointed.

Julia Davis, who’s a columnist and “Russian media analyst” for The Daily Beast, spread this letter.

“The Danish intelligence has accused Russia of forging a 2019 letter to Senator Tom Cotton, claiming to be from Greenland’s foreign minister & alleging there’d be an independence referendum,” Davis tweeted. “Tom Cotton claims to have given Trump the idea to buy Greenland,” Davis declares.

Now, this is a bit like blaming someone who receives a letter from a Nigerian prince asking for money. The letter is fake; it doesn’t even have an address on it. The only people it will drag in are people who have no critical thinking skills whatsoever.

Enter the easily manipulated liberals who fell all over this today — and there were a ton — suggesting that somehow this “letter” prompted Cotton to give President Donald Trump the idea to buy Greenland. And then, “Russia, Russia, Russia!” Waaah! Reeee!!”

This crazy account wants to warn us about Trump’s fitness, while completely falling for this:

Rube at the MMfA spreading misinformation.

Editor at large from The Hollywood Reporter has no idea what she is saying.

Yes, unfortunately, Dems are in power now. But, that was just a sample of the crazy.

However, there are multiple problems with this exercise in idiocy.

First, as I noted, the letter was fake and there isn’t even an address on it. The purpose was likely to influence folks in Greenland not to reach out to Cotton. Cotton’s office said they never even got such a letter, so they certainly weren’t influenced by it. So, the whole claim implied by Davis falls apart.

Second, Cotton’s suggestion that Trump acquire Greenland preceded the letter by months. Cotton wrote an op-ed proposing the idea in August; the fake letter was dated October 23. So, unless the letter convinced him by going back in time, there’s no way it influenced him in any way.

Third, while Russia might want to sow dissension, they certainly wouldn’t want more U.S. involvement in Greenland. Indeed, the idea of more U.S. involvement in Greenland was a great idea because it would have improved our strategic position. Now, maybe the idea of buying it wasn’t going over, although Harry Truman made a previous offer. But certainly greater strategic position made a lot of sense. So, the idea that Russia somehow would truly want more U.S. presence in Greenland is just flat-out stupid.

Tom Cotton’s comms guy had a lot of fun mocking the leftists on Twitter.

So, what you have now is the people spreading this — effectively helping a Russian op to sow conflict — even three years later because of their partisanship and because they don’t have a single brain cell left. Hmm, this not unlike what they did with Russia collusion for years. Can they please get some new conspiracy theories that don’t involve Russia, so they can stop embarrassing themselves?