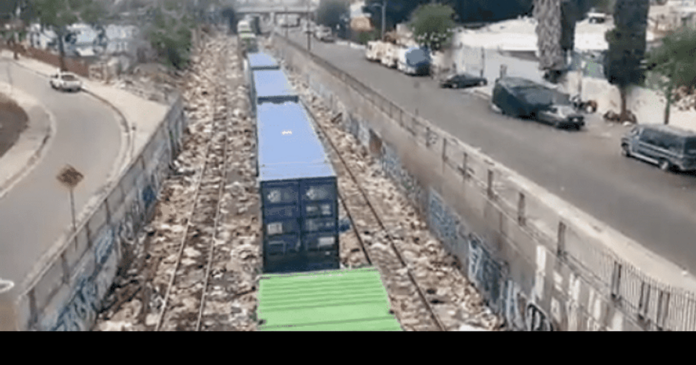 We’ve seen a lot of problems with the supply chain leading to delays of packages and bare shelves. Joe Biden has claimed success, despite the bare shelves and despite the same number of ships backed up in the ports of Los Angeles and Long Beach that were stuck there when he announced that he would be formally addressing the issue last year.

But ships and trucks having issues aren’t the only problem.

Photojournalist John Schreiber for CBS’ LA affiliate posted an eye-opening thread about train burglaries in Los Angeles. The thread has gone viral, with the initial video gaining over 5.6 million views. The stunning visuals are something else, showing empty Amazon bags and boxes, and UPS parcels strewn all over the tracks. If you’re missing a package, this might be the reason why.

Schreiber said he found a lot of things bound for the Northwest on the tracks.

So, how does this possibly happen, you ask? The trains slow down and stop in that area as they are waiting to get into the nearby facility. The thieves then break into the containers and take whatever they can.

As you look at the remains left all over the tracks, consider this. This is just 30 days’ worth of thefts, and this is just one area being hit.

The fact that these thefts are going on is rather obvious — it’s spread out all over the tracks. So, what have they been doing to try to stop this? The LAPD isn’t responsible for policing the trains — the Union Pacific has their own police. They are arresting people and trying to chase people away. But it’s Los Angeles, so there’s a small problem — as soon as they arrest the people, they’re back out and likely back at it.

They’ve arrested 100 people in three months, according to Schreiber, but then they’re “released within 24 hours” and back out on the tracks.

There are 90 containers breached a day, theft up 356 percent, according to Union Pacific. UP is now considering rerouting its trains out of LA county, so they don’t have to deal with this, but are begging the DA to be harder on the thieves.

The DA says some of the cases are moving forward but some are dismissed for “lack of sufficient evidence.” Maybe they need to check the evidence that’s all over the tracks? Notice they don’t say how much of each in response. I’m willing to bet far more dismissed than moving ahead.

Union Pacific is saying they haven’t been contacted about any court proceedings, which indicates that the response from the LA County DA is likely a lot of gas.

The problem is that given it’s Los Angeles — even with “evidence,” if it’s just a theft charge, it’s likely that it will often just be dismissed. We’ve written at some length about the great failures of the radical approach of Los Angeles County D.A. George Gascon who seems to think his role is to protect the criminal. Unfortunately, it’s a problem with leftist DAs now taking over in high-profile positions across the country.

When you don’t address the problem, this is the kind of result you get.