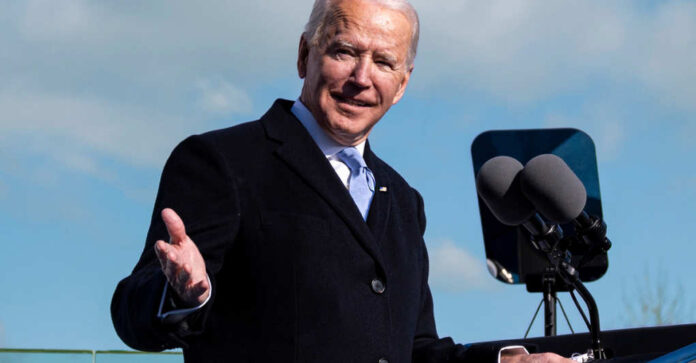 As you have likely have noticed, Democratic President Joe Biden has an affinity for his homes in his home state of Delaware. And while it’s not all that uncommon for a president to want to vacation in their home away from home during their tenure in the White House, Biden seems to do it more often than most.

In fact, with the holiday season now over and Biden having spent the better part of that in Delaware, the number of days during his first year as our president sits at around 95. That’s a whole one-fourth of the year – spent on vacation.

Now, as appalling as that might be, especially considering the kind of year we’ve had – you know, the kind fraught with crisis and chaos that would likely encourage any leader to never stray far from his desk – one of the most astounding facts comes not from the fact that he has done so but by where he’s chosen to go.

As I mentioned before, he goes home, which is not at all surprising in and of itself. However, you might think differently if you knew that his home in Delaware, or at least a growing number of properties surrounding his Rehoboth Beach home, seems to be decorated with a certain sign that cheers on some guy named Brandon.

Yep, that’s right, the now-famous “Let’s Go Brandon” movement has made its way, quite literally, to Biden’s doorstep.

As Turning Point USA’s Benny Johnson discovered on a recent trip to visit the Biden property, the president has to pass by one of most massive “Let’s Go Brandon” signs around for miles to get to his home. As Johnson found out, one of Biden’s neighbors, a local man, erected the sign a few months back just to “have a little laugh in there.”

To be sure, it’s quite comical.

Although both the man and I have to agree, the funniest part is not that the sign exists and is so close to the Biden residence, as that Biden still seems to be oblivious to it and its meaning.

Now, for those of you feeling a bit in the dark, the whole “Let’s Go Brandon” slogan came about last year after a NASCAR race in which a driver named Brandon Brown had won. NBC interviewed the driver afterward, and the reporter mistook the crowd for chanting “Let’s Go Brandon” when they were quite clearly saying “f*** Joe Biden.”

And the now-famous slogan was born.

But Biden seems to not understand what it actually means. In fact, during a recent Christmas Eve livestream event, one caller ended his on-air message with the slogan. Biden, apparently, completely clueless about it, replied, “Let’s go, Brandon, I agree.” Quite naturally, his wife knew all about the slogan and promptly did an eye roll.

As the neighbor who erected the LGB sign said when speaking to Johnson, “Now even Brandon endorses ‘let’s go, Brandon.’ Yeah, OK, that’s good. That’s the first thing Joe and I agreed on. I think, maybe.” No doubt laughter accompanied that conversation…

Another thing Johnson took note of about the Biden’s Rehoboth property is that, unlike vast portions of our southern border, the entire thing is surrounded by a massive wall.

As Johnson says in his video, “That’s right, ladies and gentlemen: Joe Biden has himself a wall. He built the wall… by his own house to protect himself.”

Now to be clear, this is not some typical white picket fence or even chain link that simply keeps honest people honest and from entering the property uninvited. No, this is a $455,000 wall built around the exterior of the property lines, according to the New York Post and reports from the Department of Homeland Security.

The same man who put up the LGB sign jokingly says the large security fencing is how the neighborhood makes sure Biden doesn’t “stray off” as he is prone to and so his handlers don’t have to “go look for him” later.

Of course, the reasons, whether real or assumed, aren’t the point.

The point is that while Biden clearly has a problem with building security fences around our nation, you know, for national security reasons, he doesn’t have the slightest concern about having one that does the same around himself.

No wonder “Let’s Go Brandon” is taking over everywhere, even right next to Biden’s own home…