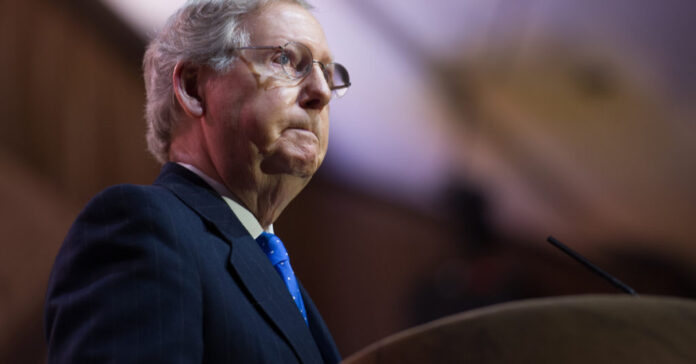 Mitch McConnell, the Senate Minority Leader, wrote a memo to Capitol Hill reporters that the Democrats were making another run at a radical takeover of the Senate, of elections, and America!

McConnell lashed out at his Democratic colleagues because of their efforts to break a filibuster so that they could pass a couple of election overhaul bills that are awaiting votes. The Kentucky senator blasted the Democrats for using crisis rhetoric to ram the bills through the Senate.

McConnell wrote in the memo, “They will try to use fake hysteria to break the Senate and silence millions of Americans’ voices so they can take over elections and ram through their radical agenda.”

Those in McConnell’s office also wrote that the senator and other Republican colleagues have continually stood up to the left. They have called out their Big Lie that there is an evil anti-voting conspiracy sweeping across the country. They promised that people would see more from the GOP this coming week.

The memo took some quotes from statements McConnell has made over the last few weeks, including the remark that Democrats were trying to break the Senate.

“It appears as if the majority leader is hellbent to try to break the Senate. His argument is that somehow state legislatures across the country are busily at work trying to make it more difficult for people to vote. Of course, that’s not happening anywhere in America,” McConnell said.

Senator McConnell has argued that 94% of Americans think it is easy to vote. There was a record turnout in the 2020 presidential election. It was the biggest since 1900. He explained that it is already against the law to prevent people from voting based on race, that the Voting Rights Act is still intact. He then asked the question, “Wha is going on here?”

He believes all this is an excuse to try to break the Senate.

The memo included excerpts from McConnell’s floor remarks where he lashed out at “the Left’s Big Lie.” This is that election reforms in the Republican States are threats to American democracy.

McConnell believes that the left keeps bringing up their Big Lie that mainstream state voting laws are “Jim Crow 2.0.” But he said that this insults the intelligence of the American people and that all the facts disprove it.

McConnell wrote that the irony is that in one of the states where there seems to be a meltdown, the new GOP proposals mandate more days of early voting than many Democrat-run states. He said that America’s democracy is certainly not in crisis, and just repeating this rhetoric doesn’t make it true.

McConnell reiterated that the 2020 election saw the biggest turnout in more than 100 years. He called what the left is doing “fake hysteria, ginned up by partisans.” He believes American citizens know this. The senator noted that in New York, the state’s mostly Democratic voters rejected some left-wing ballot measures that would have changed voting laws.

McConnell took aim at leading Democrats who are hypocritical when trying to break the filibuster when it suits them. He said the left could not be trusted to secure the nation’s elections when they could not even secure the filibuster. He said that no party that would “trash the Senate’s legislative traditions” can be trusted to seize control over election laws across the country. And no one party who is desperate to take over the democracy can be allowed to do it.

Finally, McConnell condemned Democratic leaders for trying to “exploit” the anniversary of the January 6 Capitol riot. He said they were using this to push election reform and more on their progressive agenda.

It seems that the Democrats are up to no good. Luckily, McConnell seems determined to stop them in their tracks.