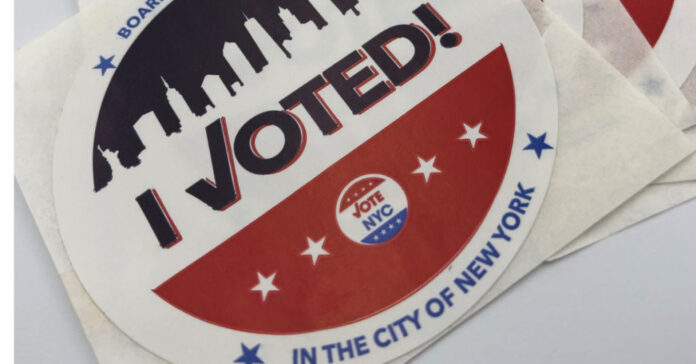 Non-US citizens cannot cast votes in any political race unless they raise their right hands and join team USA. Similar voting laws apply to any American citizen choosing to permanently relocate outside of the US. They would be required to surrender their citizenship to have any say in the government of their new home. If they refuse to, and they don’t like the way things are being run, they’d have no option but to deal with it or catch a return flight to from whence they came.

Most people can agree how this makes perfectly good sense. Most… But if you’re a non-US citizen living in the Big Apple, this is your lucky day. Get yourself on down to the election office and get your voter ID. You’ve just been awarded a say-so in all things political for a government that doesn’t belong to you. ‘Murica…

You read that correctly. Immigrants account for 40% of NYC’s population. Some of them have been in the US for decades yet they’ve never developed enough of a fondness for the country to become a citizen of it. If they’re legally in the U.S. and enjoying the barrage of free handouts they’re entitled to, why should they? They have it way better than some of America’s wretched masses trying to squeak through life without the luxury of being an import? They’d be cutting their own throats.

Mayor Eric Adams threw his full support behind the idea so beginning next year roughly 800,000 non-US citizens will be lining up at the polls unless a judge puts a stop to the idiocy. They would be barred from voting in national elections but they’d have everything to do with what happens in NYC, home to AOC and her crackpot cronies who end up in D.C. voting on national matters.

Every president in the history of the U.S. with the exception of Donald Trump was once a locally elected official who managed to climb to the top, but only because we, America’s bonafide citizens, allowed them to make it that far. What if, so goes NYC, so goes the nation, kicks into action? Wouldn’t be a first.

NYC election officials now must begin the task of getting this passel of immigrants registered in such a way that prevents them from voting in national elections, such as a different color voter ID card. They’ve also decided that legally residing residents who’ve been in the city for at least 30 days have waited plenty long enough to gain voting rates. The list of qualifiers also includes “Dreamers” and every single immigrant authorized to work in the US.

Mayor Adams was a bit skeptical concerning the 30-day rule but said it wasn’t a deal-breaker. Former City Councilmember Ydanis Rodriquez who let the charge up Time Square Hill said, “We build a stronger democracy when we include the voices of immigrants.”

But there’s something terribly wrong with the former councilman’s statement. A person first must totally commit to the democracy they wish to be a part of by renouncing their previous foreign citizenship and vowing allegiance to their new chosen home. That is…if they wish to be awarded any type of voting rights anywhere, inclusive of their local Moose Club. Period.

The new law will allow qualified non-US citizens to elect NYC’s mayor, its city council members, borough presidents, the public advocate, and the comptroller. They’ll be the ultimate decision-makers in determining who will run and control America’s largest city. Just for the record, NY has 29 electoral votes that help determine the outcomes of presidential elections, so chew on that for a while.

Since a few politicians around town are objecting to this profound insanity, the law still has another court it has to slide through. But it’s merely a formality to appease the naysayers.

It’s nerve-wracking to comprehend how, in the not too distant future, the non-citizens of NYC will be sending all of their AOC wannabes to D.C. to tell us, the citizens of the great nation, how to live our lives the “American” way.