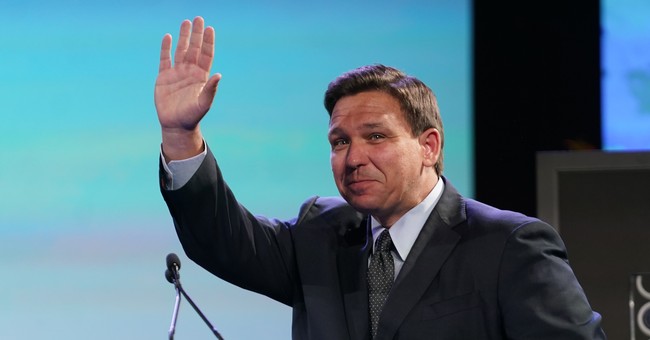 Ron DeSantis continues to be public enemy number one for Democrats, at least outside of the machinations of the farcical January 6th committee. The Florida governor has absorbed hit after hit from shameless media outlets that have misconstrued the facts time and time again.

You’ll likely recall the deranged “60 Minutes” piece that tried to down DeSantis as being bought off for distributing the vaccinations to the most vulnerable, a move that ultimately saved many lives in a state that holds the nation’s largest elderly population outside of Maine. Then there were the arguments over monoclonal antibodies. At first, DeSantis was derided for pushing them at all instead of only focusing on the vaccines. Later, the narrative became that he was selling access to the treatments. That was also completely false.

And we haven’t even gotten into the vast conspiracies surrounding Florida’s counting of COVID deaths. Over and over, such lunacy has been debunked, but they just keep coming.

Of course, the media never stops, so a new attempted gotcha was delivered last night by the Miami Herald. According to the reporting, the State of Florida delivered a shipment of “scarce” COVID treatments to a “private clinic” before they sent them to a big hospital in Miami. The story was picked up and printed by the Tampa Bay Times as well.

Also note that while DeSantis isn’t named in the piece, the Governor controls and oversees the Florida Department of Health. In other words, the implication here is obvious.

Before we get into the details, note the use of the term “private clinic” here. That’s purposeful, and it’s meant to conjure up the same bias asserted by the left’s attacks on private schools. Of course, in reality, private clinics are the backbone of the healthcare system. The family doctor you see almost certainly has his own private practice. The same is true for nearly every other doctor in the country outside of emergency care and those that work directly for a hospital system (surgeons, cancer specialists, etc.). At what point did hospital patients become more worthy of receiving treatment than those at a private clinic?

In short, given the lack of any moral distinction between a private clinic and a hospital, the Herald’s reporting falls on its face immediately. Besides, Broward County is one of the bluest areas in Florida. Is the assertion that the GOP-led Florida government is shipping treatments to their liberal friends?

Yet, as is to be expected, the details of the story are also bogus. There was no favoritism shown here, nor did the Florida Department of Health do anything wrong by sending the treatments to the clinic in Broward County. In reality, the clinic was open on Christmas Day, treating high-risk cancer patients, which is exactly the drug’s prescribed use. It’s meant for those who are heavily immunocompromised, i.e. cancer patients and transplant patients. Is the argument that high-risk individuals at hospitals are somehow more deserving of treatment than those at a private clinic? That would be ludicrous and immoral to assert.

The Herald is famous for putting out garbage pieces that obscure facts and refuse to place blame where it belongs. For example, the treatments are scarce because Joe Biden federalized distribution and then dropped the ball on getting enough supply. Florida has only been given 6,300 doses to date of Evusheld. Why is the Herald not dragging the White House instead of taking another underhanded shot at DeSantis?

We know the answer to that: Because they are absolute hacks.