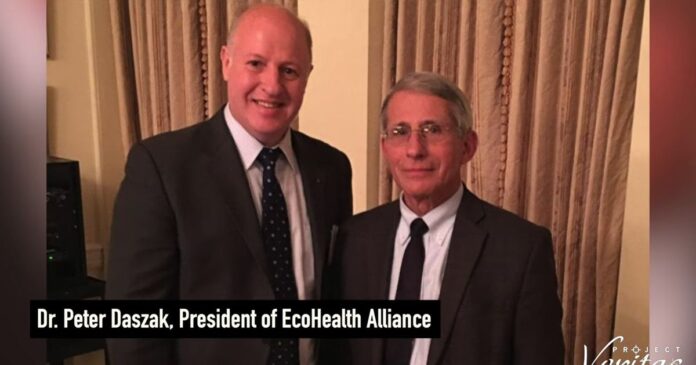 As we previously reported, on Monday night Project Veritas released a new report announcing that they’d obtained US military documents proving that Dr. Anthony Fauci had lied to Congress and, more specifically, “never-before-seen documents regarding the origins of COVID-19, gain of function research, vaccines, potential treatments which have been suppressed, and the government’s effort to conceal all of this.”

One document, an August 13, 2021 report on Defense Advanced Research Projects Agency (DARPA) letterhead from the Commandant of the Marine Corps Fellow, DARPA to the Inspector General of the Department of Defense carries the subject line: “SARS CoV-2 Origins Investigation With US Government Program Undisclosed Document Analysis.” The analysis reports that the 2018 EcoHealth Alliance coronavirus research proposal that DARPA rejected because it was too risky and it likely violated the gain of function research ban was then funded by NIH/NIAID and that SARS-CoV-2 – a/k/a COVID-19 – resulted from that research.

In the video, Project Veritas identifies the author as Marine Corps Maj. Joseph Murphy, then-Commandant Marine Corps Fellow at DARPA. According to his LinkedIn page, Maj. Murphy is now retired.

After the date, the to/from, the subject line, and a list of attachments, the first page of the memo reads:

SARS-CoV-2 is an American-created recombinant bat vaccine, or its precursor virus. It was created by an EcoHealth Alliance program at the Wuhan Institute of Virology (WIV), as suggested by the reporting surrounding the lab leak hypothesis. The details of this program have been concealed since the pandemic began. These details can be found in the EcoHealth Alliance proposal response to the DARPA PREEMPT program Broad Agency Announcement (BAA) HR00118S0017, dated March 2018 – a document not yet publicly disclosed.

The contents of the proposed program are extremely detailed. Peter Daszak lays out step-by-step what the organization intends to do by phase and by location. The primary scientists involved, their roles, and their institutions are indicated. The funding plan for the WIV work is its own document. The reasons why nonpharmaceutical interventions like masks and medical countermeasures like the mRNA vaccines do not work well can be extrapolated from the details. The reasons why the early treatment protocols work as curatives are apparent.

SARS-CoV-2’s form as it emerged is likely as a precursor, deliberately virulent, humanized recombinant SARSr-CoV that was to be reverse engineered into a live attenuated SARSr-CoV bat vaccine. Its nature can be determined from analysis of its genome with the context provided by the EcoHealth Alliance proposal. Joining this analysis with US intelligence collections on Wuhan will aid this determination.

Murphy then goes into the rejection by DARPA and claims that the proposal was actually funded by NIAID and that work began on the project.

DARPA rejected the proposal because the work was too close to violating the gain-of-function (GoF) moratorium, despite what Peter Daszak says in the proposal (that the work would not). As is known, Dr. Fauci with NIAID did not reject the proposal. The work took place at the WIV and at several sites in the US, identified in detail in the proposal.

DRASTIC independently assesses that the tone of the proposal (see for instance the ‘our cave complex’) and the deep suggested involvement of some of the WIV parties (Shi Zheng Li employed half-time for 3 years – paid via the grant – and invited to DARPA headquarters at Arlington), may not have helped either – especially in the absence of any DURC risk mitigation program.

On the efficacy of mRNA vaccines, Murphy’s report states:

The gene-encoded, or “mRNA,” vaccines work poorly because they are synthetic replications of the already-synthetic SARSr-CoV-WIV synthetic spike proteins and possess no other epitopes. The mRNA instructs the cells to produce synthetic copies of the SARSr-CoV-WIV synthetic spike protein directly into the bloodstream, wherein they spread and produce the same ACE2 immune storm that the recombinant vaccine does. Many doctors in the country have identified that the symptoms of vaccine reactions mirror the symptoms of the disease, which corroborates with the similar synthetic nature and function of the respective spike proteins.

The vaccine recipient has no defense against the bloodstream entry, but their nose protects them from the recombinant spike protein quasispecies during “natural infection” (better termed as aerosolized inoculation).

Regarding ivermectin and hydroxychloroquine, the much-maligned treatments for COVID-19:

So, according to Murphy, the US government identified ivermectin, hydroxychloroquine, and interferon as curatives for COVID-19 in April and May of 2020, yet pharmacists are still not filling prescriptions for them in January 2022? Why? Who made the decision to essentially sentence over 800,000 Americans to death?

All of this information about the proposed research and all of the experiments that had already taken place (and which were denied by Fauci, Daszak and every scientist they could coerce/threaten) was readily available in EcoHealth Alliance’s response to the PREEMPT BAA, which should have been an unclassified, publicly-available document, right? Right. However, the document was somehow placed in a top secret share drive, according to Murphy’s report:

The EcoHealth Alliance response to the PREEMPT BAA is placed along with other proposal documents in the PREEMPT folder on the DARPA Biological Technologies Office JWICS (top secret) share drive, address: Network/filer/BTO/CI Folder/PREEMPT

Was it a cover-up? More from Murphy’s report:

A technological challenge as difficult as inoculating bats in China would be tried at DARPA first. The massive, “Manhattan Project”-level of information suppression executed by the government and the Trusted News Initiative indicates that it would be covered-up if something bad happened. The lab-leak hypothesis and squabbling between Senator Paul and Dr. Fauci indicated that the cover up was more localized. Further, an actual cover-up would be more disciplined with its paperwork. So, I presumed that unclassified files would be concealed on a higher network and found them where I expected them to be. I understood what they were and their content, pushed the files off-site, and compiled this report.

If what we know so far about Murphy’s report is correct, there should be (or should have been) corresponding documents at NIH. Given what has happened since the research reportedly started, it wouldn’t be surprising if those documents met shredders and Bleach Bit. But, knowing the cast of characters involved, it also wouldn’t be surprising if they all kept some kind of leverage document to point the finger of blame elsewhere.

What did the Department of Defense’s Inspector General do with Murphy’s report? What else did it contain? Hopefully, there will be follow-up reporting from Project Veritas.