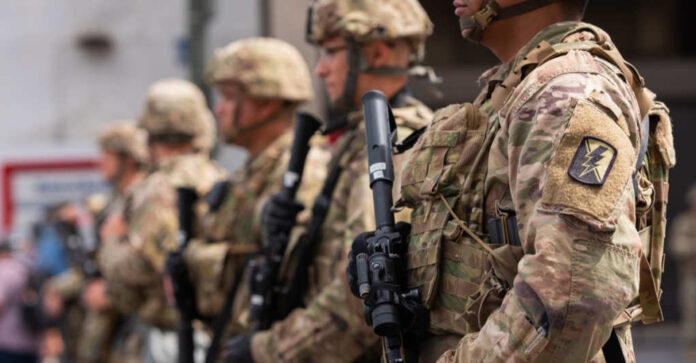 In the very near past, America was in an uproar over the situation at the US/Mexico border. Sides were chosen, battle lines were drawn, and social media exploded with ferocity such as never before experienced. But then newer stuff to get upset about came along and our focus, as is always the case, got shifted. But this in no way indicates the problem at the border has resolved itself. Au contraire. There’s still plenty of activity going on down there, only these days, it’s US troops who are doing most of the suffering.

Let’s concentrate on Texas where over 10,000 national guard troops are still assigned to the task of blocking hordes of immigrants from getting into the Lone Star state. In fact, their entire mission is called “Joint Task Force Lone Star.” The troops have been camping out down there for a long time. Too long. And it shows.

Just this past weekend one of the soldiers shot and killed himself. The Army claims the incident was alcohol-related and they might be correct in a sense. But was the alcohol only used to muster enough courage to do what the young soldier did? This would be the better assumption. In a similar but non-alcohol-related incident, just prior to New Year’s Day a soldier much to his own dismay survived his suicide attempt.

Almost all of the troops are National Guard members who never counted on a long-term activation interfering with their civilian lives. They’d of signed up for active duty had they known, and this is specifically why they didn’t. They have other obligations to attend to such as running family businesses and such, but they still wanted to serve.

The Army chaplains assigned to Joint Task Force Lonestar aren’t blind to what they’ve been seeing so they sent out a “morale survey” to find out firsthand what’s going on. You just read about only two incidents. We failed to mention the string of suicides where the ultimate goals were achieved. The Army attributed those to lousy living conditions and struggling to support families back home on Army pay when some of them earn a whole lot more at their civilian job.

Fiscal 2021 broke the record on apprehensions of both human and drug traffickers at the Texas southern border. Gov. Greg Abbott called the troops to long-term active duty status in support of the Texas Department of Public Safety.

When Abbott decided that the much smaller detachment of Nat’l Guard troops at the border wasn’t nearly enough, he called on its members from around the state to drop life as they knew it and head south. The consequences have been apparent and they’re revealing themselves more each day.

Adding insult to injury, because the troops were called to long-term duty by the state and not by the federal government, as of at least right now, they’re considered state employees. Their temporary active duty status will not count towards any of their federal benefits. They’ll receive no credit towards retirement, educational benefits, or Veterans Affairs disability coverage. Can you see the problem now?

And this is not to mention how the Texas Military Department recently cut their state tuition assistance benefits program to help these troops out by 54%, and they made it retroactive to last Fall meaning those who used the benefits then, have to pay some of it back. Thank you for your service, now scoot on down to the border where you’ll earn way less money and have a more difficult time repaying the money you owe us.

It certainly doesn’t appear as though a morale survey was required to figure out the problem. These troops are pretty much being screwed, blued, and tattooed, but what’s the fix? Or is there one?

Credit still goes to Gov. Abbott for having big enough kahunas to use the only option available to him. It was either that or let truckloads of drugs and kidnapped kids flow freely into the state he’s being paid to protect. He’s not getting any help from Joe Biden who’s hoping if he ignores the problem long enough it’ll go away.

Nothing is going to go away except for maybe the lives of more National Guard members if Biden doesn’t deploy some active-duty troops who are better accustomed to doing these types of things, and allow these guys and gals who are doing their damndest to help out to get back to their lives while they still have one to get back to.