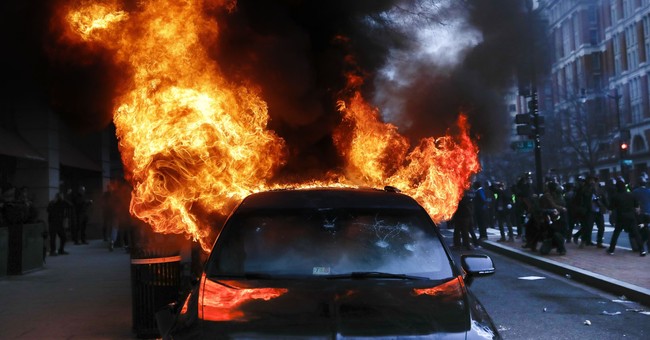 I thought today might be an appropriate day to talk about people who question the legitimacy of an election.

I’m talking about all the Democrats and folks on the left who questioned the election of President Donald Trump in 2016.

But Democrats didn’t just question the election: They actively stoked misinformation about things like Russia collusion to undermine Trump. This, even though Trump was the clear winner of the election. His election was not ever in question because of Russian interference. We had both Joe Biden and Kamala Harris publicly agree and promote the claim that Trump was “illegitimate.”

Here’s Biden agreeing with a woman during the campaign in May 2019 that Trump was an “illegitimate” president and stoking the Russia collusion hoax that Democrats paid to help feed. Not only did Biden agree with her false claims, he even joked that she could be his running mate.

Then, there’s Kamala Harris agreeing with Charlamagne tha God that Trump was an “illegitimate” president because of Russian interference.

Bottom line? There is no evidence that there was any Russian interference as to any votes. Yet, that hasn’t ever stopped the Democrats’ misleading claims.

After Trump won in November, Democrats went into super overdrive, trying to figure out how they could change the results of the election. They were intent on stopping Trump from taking the oath of office. So they started on this effort to find enough electors not to vote for Trump. The theory was that if they could get 37 Republican electors willing to vote for a different Republican to deny Donald Trump a majority in the Electoral College, they might be able to force a contingent election in the House of Representatives. Now that was nuts and never going to succeed, but that didn’t stop people.

The electors were harassed, were inundated with hate emails, and faced death threats. People actively tried to suborn them to prevent them from voting for Trump. Not only was the Clinton campaign involved in the spreading of the phony Russia collusion story to interfere in the election, but people forget they were also in favor of a last-minute effort by the Democrats, spearheaded by Christine Pelosi, House Speaker Nancy Pelosi’s daughter, to have the intelligence community “brief” the electors on Russian “interference” to try to influence their votes. If claiming Russia collusion didn’t work the first time they put it out there, the Clinton campaign was all-in to try to have it pushed directly to the electors.

But that wasn’t all. Congress still had to certify the election.

On Jan. 6, 2017, Rep. Sheila Jackson Lee said at least ten Democrats would be challenging the validity of the electoral votes in multiple states. She said there would also be challenges trying to disqualify electors as ineligible to serve. “This is an American question of justice and fairness and the appropriate running of presidential elections,” Jackson Lee said. Now, you always had a right to object to the electoral vote from a state if you thought there was a problem. That only became an “attack on democracy,” apparently, when Republicans objected. But Democrats have done it for Trump and prior Republican presidents for years.

Let’s not forget that even after that gambit failed, Democrats — including the late Rep. John Lewis (D-GA) — said they would not attend the inauguration because they claimed Trump was “illegitimate.” Trump criticized Lewis saying he should be concerned about crime in his own district and he was all talk, no action.

So did Democrats stand up for the norms and chastise Lewis for his remarks? No, more Democrats then attacked Trump. 67 of them said they would be sitting out the inauguration — including people who were defending Lewis and/or those claiming Trump was illegitimate.

Among the people who said that they would not attend and questioned the legitimacy of the election was — wait for it — Rep. Bennie Thompson, the current head of the Jan. 6 Committee.

Thompson, the top Democrat on the House Homeland Security Committee, claimed concerns about reports of Russia’s alleged role in the election. “The Russian hack was, at its core, an attempt to delegitimize our democracy,” Thompson said in a statement earlier this month. His legislative director said, “Congressman Thompson continues to have concerns about the role that Russia had in our country’s democratic process.”

Then came Jan. 20 and the time for the peaceful transfer of power. Or not so much. Thousands of radical leftist protesters rampaged through D.C. trying to disrupt the inauguration. It was an organized effort to disrupt the election, it was not a peaceful protest that got out of control. It was a planned effort to not have a peaceful transition. They attacked buildings, set things on fire, and attacked police.

One protester, Tom Faison, told The Washington Post that the property damage was done with “nuance and intention.”

The Post also reported that a majority of the arrested protesters were not residents of Washington, D.C., Maryland, or Virginia. Tom Massey, 32, of Philadelphia was among those arrested, and he told The Post, “I think there should have been more violence yesterday.”

More than 200 people were arrested in the violent action. So where was the DOJ to investigate this attack on democracy? Where was the FBI page trying to identify all these people who attacked the peaceful transfer of power? Of those 200 people who were arrested, surely some must have suffered some consequences for this attack on democracy, especially those who attacked the police?

How much has our system of justice been undermined? There were some acquittals because it’s hard to prosecute when everyone looks the same — dressed in black bloc — which is the point of dressing that way, which is why Antifa does it. But most of the charges were just dropped. Not one person was held to account for all the violence with more than 200 arrested. They all got off. So much for the high priority of protecting democracy. “Protecting democracy” apparently doesn’t matter when the attackers are leftists. There was no FBI page, no commitment to pursue everyone involved. “One rule” of law for all, Attorney General Merrick Garland claims? That’s a lie.

So to wrap up, you didn’t just have three hours of people rioting. You had years of an organized effort to undermine the legitimacy of a duly elected president by the highest powers in the Democratic Party, including the opposing losing candidate. You had the law enforcement powers of the government engaged against your political opponent in an unprecedented action.

Just a few thoughts that might be good to ponder today.