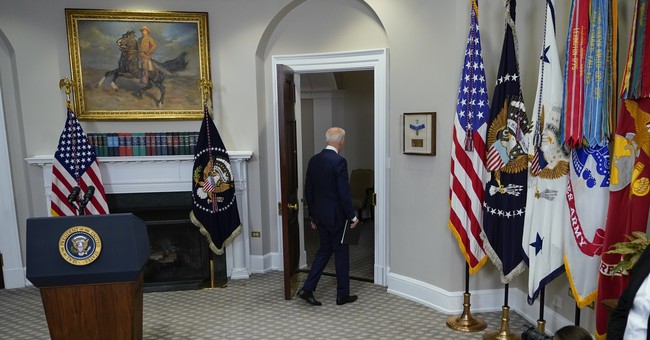 Omicron has brought with it some complications for our society but despite cases breaching the 1 million mark, deaths have trended downward and hospitalizations are expected to stay lower than they had under previous variants, proving that the latest COVID-19 variant is more bark than bite.

But people are expecting the bite, and that’s likely why more people are staying home instead of going out and working. As reported by the Washington Examiner, jobless claims have risen past what experts expected, climbing to 207,000 last week instead of declining to 195,000 as originally predicted. This is on top of the disappointing jobs report from November that also surpassed the expert’s expectations with 300,000 fewer jobs being added to the economy than anticipated.

Omicron is definitely to blame for some of this, but taking a step back, one has to wonder if other factors went far in contributing to it.

For one, the Biden administration and its lapdog media spent a good deal of time and effort scaring people to death about Omicron, causing blue state leaders to take action and further complicating the jobs market. Moreover, it’s likely that many private citizens were terrified of going out, choosing instead to file a jobless claim and collect money from the government.

Rest assured, this is purely Biden’s failing and not the private sector’s. Amid all these bleak numbers is the fact that numbers show employers are doing what’s necessary to hang onto employees. Layoffs are happening at a much slower rate as the Examiner reported:

While the new surge in cases could portend bad news for the labor market, it is buttressed by recent weeks of better-than-anticipated jobless claim reports. Last month new claims for unemployment hit the lowest level for initial claims in 52 years, a sign that layoffs are very rare as employers try hard to hold on to workers.

“New jobless claims are up a bit in the latest week but remain close to the lowest levels in decades,” said Mark Hamrick, Bankrate’s senior economic analyst. “This suggests workers can be reasonably confident about job security and an upbeat employment outlook for this year.”

It all points to a narrative about the dangers of Omicron that is setting up America for failure. Going out to get a job and then keeping a said job has never been a more assured undertaking. One just has to get out there and get it, but people aren’t doing it.

The Biden administration has made something of an unstable environment, especially for those who live in blue states who never know when the next lockdown or regulation is coming. Confidence in privacy is also down. You never know when you’ll be forced to inject something into your body by your employer or lose your job if you don’t comply. This, at least, is what the populace has been subjected to in the recent past.

If the Biden administration really wanted to restore confidence in the job market, they would have to walk back quite a bit of scaremongering they’ve done over the latest COVID variant, but it doesn’t look like that’s going to happen.