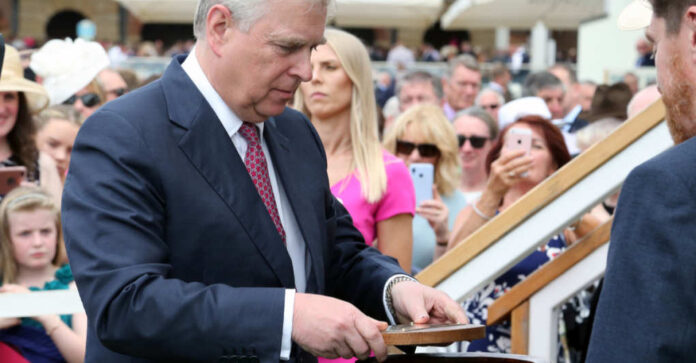 For a guy who insists on maintaining his innocence, Prince Andrew is sure going through a lot of trouble to stay out of court. Identified as a one-time close associate of Jeffrey Epsteins, the royal prince denies having an affinity for female adolescents and he refutes all allegations of having ever set his gears to grinding on top of 17-year-old Virginia Guiffre.

A publically released photo of Andrew, Ghislaine Maxwell, and Guiffre standing in a bedroom doorway begs the question of why he was even where he was in the first place. It wasn’t a child welfare check. Guiffre described her encounters with Andrew as disgusting. She said the royal pedophile would sweat buckets of smelly perspiration while she tried her best not to vomit all over herself and him.

In rebuttal, though no medical documentation can be provided, Andrew hilariously claimed to have a condition that prevents him from sweating. So it only stands with valid reason how Guiffre’s sordid tales are poppycock. One word. Lame.

The prince and his attornies are now in receipt of a previously sealed court document from 2009 which in their interpretation says Guiffre isn’t allowed to sue Andrew. Ever. The document is from a hearing where Guiffre was awarded a $500,000 settlement against Epstein.

Andrew’s attornies are trying to shimmy through a jagged loophole left by the wording of the final judgment. The lawsuit was not only settled for Epstein, but also for anyone “who could have been included as a potential defendant.” Bingo. Or so they think.

But, the mere fact that Andrew “could have” been called in also kinda-sorta indicates his guilt beyond a reasonable doubt. They know if their client is ever made to walk into a US courtroom there’s a solid chance he won’t be walking back out for a long, long, time.

The 2009 award was the result of Epstein having hired Guiffre to be a teenage sexual servant for him and his wealthy old crony buddies at his Palm Beach estate. The job description hadn’t been real clear when she signed on but the money being offered wasn’t bad.

During the earlier trial, Guiffre revealed how Epstein had literally flown her around the world to have sex with multitudes of men “including royalty, politicians, academicians, businessmen and/or professional and personal acquaintances.”

But hold on… Because Guiffre’s generalized statement did not include names, the Brits are arguing how it lets their royal pervert off the pedophile hook. So what if she used the word “royalty.” That could have been anyone from anywhere. But she was more than likely referring to that dude in the pic everyone’s already seen. Just a hunch, mind you.

Guiffre’s attorney, David Boies, has his own interpretation of the previous settlement and he said in a written statement that nothing about that past trial is relevant to Prince Andrew’s case. Boies is tugging that loophole tight, but not nearly as tight as the puckering going on with Andrew’s team of attorneys.

It makes total sense that Boies said, “He could not have been a ‘potential defendant’ in the settled case against Jeffrey Epstein both because he was not subject to jurisdiction in Florida and because the Florida case involved federal claims to which he was not a part.” Slam dunk, buddy.

Despite the overwhelming evidence against Andrew, he’s going to keep denying the allegations all the way to a prison cell. Justice will be served. He still maintains “no recollection” of having ever even met the underaged teenager who almost barfed in his face.

Prince Andrew can’t hide behind his mama’s coattails forever. Sooner or later the good citizens of the UK, who know their prince is guilty, are gonna tire of footing the known pedophile’s legal bills.

The prince is going down but no need for concern about how it might affect international relations and all that. Everyone outside of Andrews family, and probably a few of them, are praying like hell we’ll take him off of their bloody hands.