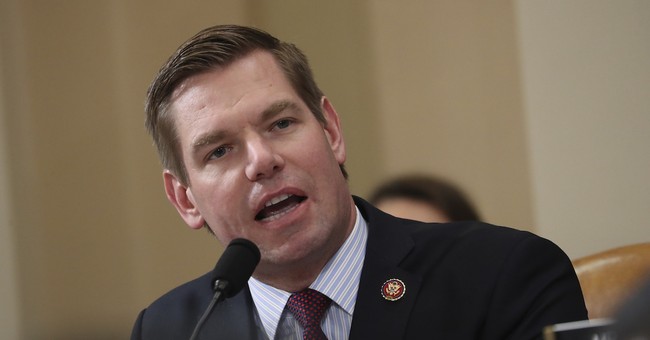 Add Rep. Eric Swalwell (D-CA) is the latest entrant in the “Democrats who’ve fled their hellhole cities/states to party in the free state of Florida” list.

California is extending its indoor masking mandates once again, from Jan. 15 to February 15.

But a maskless Swalwell was spotted in the lobby of the swanky Loews Miami Beach Hotel, with his baby son, talking with a female friend.

This was after Swalwell blamed Republicans for prolonging the pandemic — with no evidence.

“As we end 2021, mired in a deadly pandemic, you should know who has prolonged it,” Swalwell wrote. “THESE GUYS. Republican liars. Your vacation cancelled. Your kids back to virtual learning. And back to masks everywhere. For blame look no farther than #TheseGuys.”

Yet, it’s not the Republicans. It’s the Democrats pushing restrictions that are job-killing, vacation killing, and in-person learning killing. And while people in California face restrictions, Swalwell didn’t cancel his trip to Florida.

As Christine Pushaw, Gov. Ron DeSantis’ spokesperson noted, it’s a hierarchy – meaning “rules for thee but not for me.”

Swalwell is just the latest politician busted in Florida, after Democrats have criticized Florida as a deathscape of COVID. You can tell just how much he believes that, when he takes his unvaccinated baby there.

Rep. Alexandria Ocasio-Cortez (D-NY) also was just there, partying it up maskless in a packed crowd at a drag brunch.

DeSantis mocked this trend on Monday.

“If I had a dollar for every lockdown politician who decided to escape to Florida over the last two years, I’d be a pretty doggone wealthy man, let me tell you. I mean, Congresspeople, mayors, governors, I mean you name it.”

“It’s interesting the reception that some of these folks will get in Florida,” the governor continued, “because I think a lot of Floridians say ‘Wait a minute you’re bashing us because we’re not doing your draconian policies, and yet we’re the first place you want to flee to, to basically to be able to enjoy life.'”

Swalwell tried to deflect, pointing to his coffee. But there also was no mask in sight, because Florida is a free state.

Should we ask what he’s doing with a Congolese queen? Apparently, she and/or the coffee must ward off the virus.

He did handle it better than AOC did, not accusing anyone of wanting to date him.

But it’s clear that whatever Democrats are saying about DeSantis and Florida, their actions speak louder than their words — and that those actions are effectively an endorsement of DeSantis.