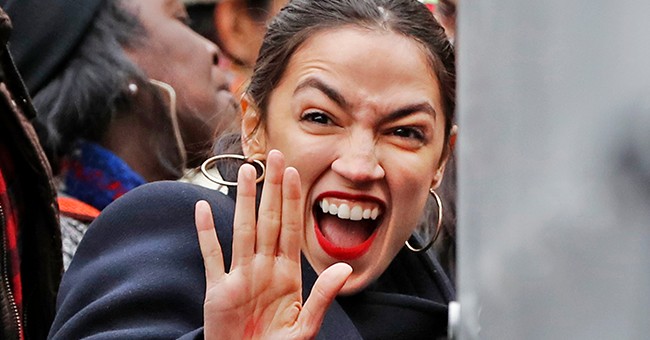 As we, and pretty everyone else, reported, Rep. Alexandria Ocasio-Cortez (D-N.Y.) on New Year’s Eve blasted out what was perhaps the most ridiculous and bizarre tweet the erstwhile bartender has ever tweeted — no small feat — in which she suggested Republicans are “mad” because “they can’t date [her],” so they “project their sexual frustrations onto [her] boyfriend’s feet.”

Memo to AOC: While it’s true that this Republican “can’t” date you — for other reasons — I wouldn’t date you with a proverbial 10-foot pole if I could. Just sayin’. And, welp, it appears that I’m not alone in my aversion to “woke” women or woke anyone or anything else.

Even worse, we now learn that there is a “dangerous rise” in the number of men who share my aversion, as reported by Refinery29.

As British “journalist,” documentary filmmaker, and activist Vicki Platt sees it, it’s “fitting” that the “white man of the moment,” Platt’s fellow-Brit, actor, and activist Laurence Fox recently “told the world” he does not “date woke women.” Oh, the humanity!

Ms. Platt, of course, was mortified by Fox’s comments — dare I say verklempt? Which she promptly shared with her fellow “ladies.”

Did you hear [the latest], ladies? Laurence Fox – who you perhaps only knew as Billie Piper’s ex-husband because you’ve never seen Lewis (what?) – does not date “woke” women who he believes are being taught that they are “victims” — irrespective of whether they are right or not.

[H]e also doesn’t believe in white privilege, irrespective of the fact that he works in a painfully undiverse industry, was privately educated, and comes from a wealthy acting family which is nothing short of a dynasty.

Obviously, none of the above sat well with Miss Vicki at all. It gets “better.”

Platt then played the sexism, racism, and Donald Trump card on Fox, given that he’s obviously a right-wing racist, misogynist, and horrid politically-incorrect sub-human being.

Fox is denying racism and sexism, irrespective of whether or not they exist. It’s nothing short of gaslighting. It’s all very Donald Trump. And as you would expect, the whole debacle has lit a fire under anti-woke poster boy Piers Morgan while gaining Fox thousands of extra Twitter followers.

I could go over all the things he’s said [Oh I bet she could — verbatim] ; I could use data to prove how wrong he is; I could express concern for his mental health (after all, who really enjoys arguing on Twitter?); I could make jokes about his behavior. But all of that would be to seriously miss the point.

So, what’s the point, again, Miss Vicki? Please tell us.

There’s nothing funny about the things Fox – or Wokey McWokeface as he now wants to be known – is saying. It’s also not particularly sad. It’s dangerous.

He is just one very privileged man, and as a result of said privilege, has been given a platform. And he has used that platform to legitimise a bigger backlash against diversity and progress which is unfolding every single day in less public corners of the internet.

Not wanting to date “woke” women, far from being laughable, is actually one of the more insidious aspects of it. Spend an afternoon on any major dating app and you’ll come across (generally white) men saying openly sexist and misogynistic things. They might say “no psychos” or that they “f**king hate big eyebrows” in their bios.

And, by and large, they also tend to hold extremely right-wing views and see themselves as victims of liberal thinking.

I could be wrong, but I sense a tad bit of bitter anger, here.

Seriously, can you imagine living life like this? As a bitter leftist? I envision these people waking up every morning, jumping online, and immediately looking for the first story that offends them… the first news item on which to drop their trusty victim card. Then they move on to the next. And the next one after that. They go to bed angry and wake up the next morning, eager to begin the same awful routine.

I can only imagine how bad that life must suck.

Then again, I’ve become convinced through the years that people like Vicki Platt actually embrace their screwed-up world, as if it provides them with a bizarre sense of power over the Laurence Foxes of the world.