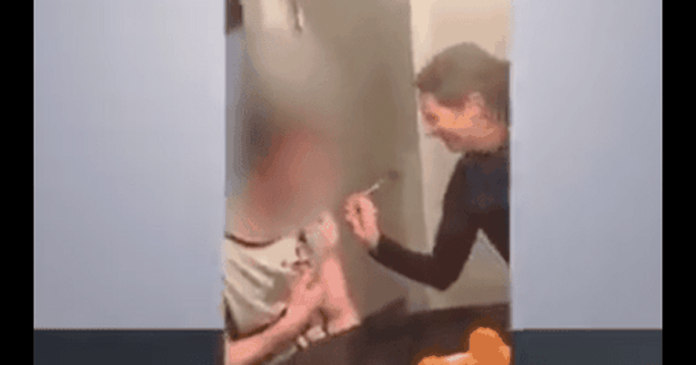 This is one of those stories that makes you just say what the heck is going on here, that there probably is more that we’re going to find out later. Because this surely doesn’t make a lot of sense now.

A Long Island high school science teacher, 54-year-old Laura Russo, allegedly gave a 17-year-old boy a shot of the Johnson & Johnson vaccine in her home — and it was captured on video.

This is all kinds of scary. The Herricks High School biology teacher isn’t a medical professional and isn’t authorized to give anyone a vaccine. Johnson & Johnson isn’t authorized for kids under age 18. It’s not clear where she got the vaccine from.

Not to mention this is more than a little freaky that a teacher thinks she can do this, including without his parents’ permission. The boy wanted the vaccine, but the parents were against it. So, in addition to everything else, it also looks like the teacher was trying to go around the parents. After the mother found out what happened, she notified the police about what the teacher had done.

This is so incredibly crazy, not to mention, what would she have done if something had happened — if the boy had a bad reaction?

Mount Sinai South Nassau Dr. Aaron Glatt told NBC4 that “[b]esides being illegal, it’s just not a smart thing to do. An authorized, licensed professional should be providing vaccines to know how to give them properly to make sure if there’s a complication that can be dealt with immediately and very efficiently.”

Russo is now facing a felony charge for what she did, with a possible one-and-a-third to four years behind bars, for unauthorized practice of a profession. The school has removed her from the classroom and reassigned her, pending an investigation. Nassau Police Commissioner Patrick Ryder said they were still looking into how she got the vaccine.

Why would this adult do such a thing, and why would the boy even let her, if she’s not even a medical professional? And who knows where she got it from or the safety of the shot, especially because it’s unauthorized for kids his age.

Talk about teachers thinking they can dictate around parents. This is more than a little concerning. We’ve seen how crazy the teachers about COVID and the vaccine can be in places like Chicago and elsewhere, but this is beyond the beyond.