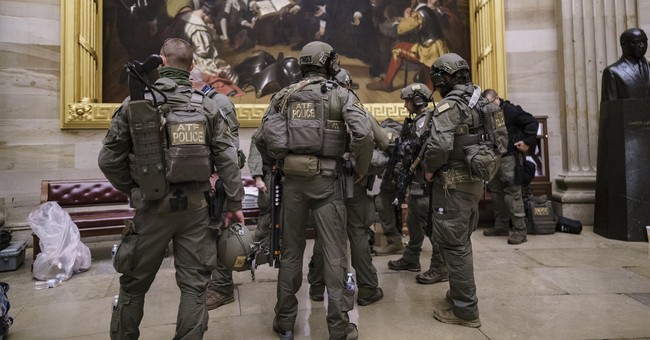 So few care about the Jan. 6 commemoration in the media because their sham was exposed last fall.

Considering the level of pre-coverage we are being treated to ahead of Thursday’s Half-dozen Days Mark, you would think this was an impending national holiday. We cannot say the media is looking for an excuse to rehash the riot seen in the Capitol one year ago — they have not shut up about it for the entire year. But they are positively vibrating with the excitement to fill the week with coverage — again — and creating every excuse to re-run the worst possible video footage from that fateful day.

Seriously, the way they are hyping this thing, you half expect to see them selling branded t-shirts and beer koozies emblazoned with “Insurrection-fest 2022.”

The media has been on an incessant drive to keep this event fresh, desperate to infuse any life into the story. All year it has been promised more disruptions would arrive, then the January 6 Commission was formed, then Wolf Blitzer honored the 9-month anniversary of the riot (???), and then some of the defendants stood trial, and then some sentences were handed down, and then…well…more stuff came out, amounting to nothing more than an excuse to keep talking about the riot.

Eventually, they filibustered the event enough to get close to the one-year mark, and that became the reason to keep blathering. It was with hilarity that Sarah Longwell, publisher of the sprung-a-leak Bad Ship Bulwark, mentioned how “There is every reason to remind Americans about what exactly happened on 1/6.” There is no way the word remind needs to be applied to a topic that has been in regular rotation in the news for 52 consecutive weeks.

However, their obsession has not led to Americans becoming concerned. A recent poll shows that across the political spectrum the favorability of Republicans has returned over the course of the year, and during that time of obsessive riot coverage Democratic Party support has regressed. This means the general public is far more concerned with the day-to-day issues impacting their life than they are with the melodrama of one year ago.

But the press has already been exposed, in a fashion. This insistence on the Capitol riot being a dire threat to the nation and our democracy is nothing more than theater in the press. After months of promising us that there was more violence we will incur, none materialized. But then finally in September – FINALLY – something tangibly violent was set to arrive.

The Justice For January 6 Rally was planned, and the media became filled with hope and promise that chaos and doom would result. In the weeks ahead of this event, the reports were not only dire but full of resignation. Our nation’s capital would once again become beset with violence, and there was little preventative action that would help. All that could be done was for the press to arrive and record the unraveling pandemonium. Their excitement was palpable.

As we all now know, nothing at all happened that day. The press wanted there to be violence – indeed, they needed it. It was the entire underpinning of their months of hysterical coverage of the riot: the insistence that the Republicans were working to unravel our democracy, and the ominous cloud called the Big Lie that no one was shadowed by except the press. The failure of the event to draw, as promised, meant a few hundred meandering hopefuls were actually outnumbered by the media that day.

To see just how manipulative of the narrative — and unserious in their claims the media was — we can look at their coverage before the rally and contrast it with the analysis in the lack of an aftermath. They move past the failure of their predictions to instantly claiming they were accurate, just that the danger has moved someplace else.

The immediate shift in approach shows there had never been an interest in reporting on things accurately, but instead, they fostered the desire to inflate the import and claim a nefarious force is toxifying our nation.

ROLLING STONE – The Upcoming ‘Justice for J6’ Rally Is Sure Sounding Like It Could Be a Runback of January 6th. A new intelligence memo warns of potential violence at a Washington rally planned for later this month

NEWSWEEK – The “Justice for J6” rally planned for Sept. 18 might present a “challenge” to American democracy

VOX – A Monday statement from the US Capitol Police warning about “concerning online chatter about a demonstration planned for September 18” already raised worries that Saturday’s Justice for J6 rally could spiral out of control and result in violent scenes reminiscent of January 6.

CNN – The physical event may matter less than the digital conversation around it. The “Justice” message has been mainstreamed across right-wing media.

NEW YORK TIMES – Though even the organizers lamented the sparse turnout, the scene showed how the Capitol assault continues to reverberate eight months later.

WASHINGTON POST – The worrisome pro-Capitol-riot activism isn’t a rally. It’s in right-wing media. If the goal of the rally this weekend is to elevate a sympathetic view of the rioters, it doesn’t really matter if it fails. After all, that elevation is already happening in the attention-seeking right-wing media ecosystem.

ROLLING STONE – The ‘JusticeForJ6’ Rally Wasn’t a Joke — It Was A Warning. The rally was small, but the movement isn’t. Support for the Capitol insurrectionists has taken root firmly inside the GOP

NEWSWEEK – The base of the Republican party believes the U.S. is being stolen from them

Note that not only is there uniformity in the shift, but it took place instantly. These outlets hyped and promised a MAGA Insurrection, Part 2, then the very next day, claimed that a lack of interest proves the movement has evolved into something else…that they never alluded to until this rally was a bust.

Every single one of these outlets had it completely wrong, and the next day tried to say that we need to listen to their expert opinion on the changes in the movement.

Then something else of an inconvenient nature took place the very next month. In October, organized activists opposing the administration stormed a federal building in Washington D.C., clashed with police, vandalized the property, occupied the facility, and some police were sent to the hospital. It was the very type of violence we had been promised would be taking place – and the press did not care.

These were environmental leftists, you see, and their brand of attack on the government is — seemingly — approved. So, organized attacks and violent uprisings in themselves are not the problems, according to the media, just which side they derive from. When liberals enact violence and take over federal buildings, there is no threat to democracy, and no need to call Congressional commissions to look into who is responsible. No Democrats are to blame for inciting this violence.

And so, the press is in a festival of remembrance this week, convinced that everyone else is gripped in dread over the myths they are spinning. The reality is we have far greater things to concern ourselves with, and are perfectly content to have the media out of our way as they participate in this celebration of their own making.