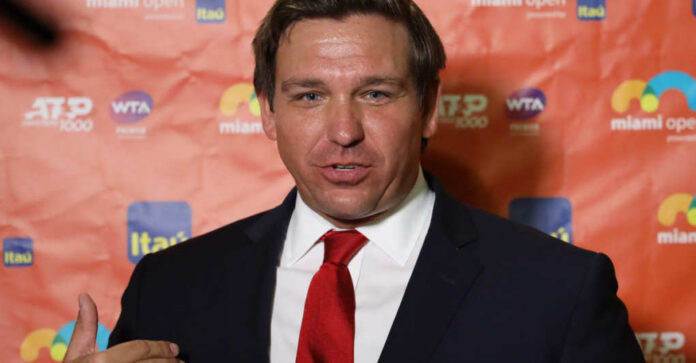 Ron DeSantis is no stranger to the liberal media. They have attacked him every chance they can get for the past two years. His break from the Democratic methods of handling the pandemic put the target on his back. And even when the liberals cannot find anything to pin on the man, they resort to publishing fake news reports to try and smear his good name. And now it seems that the media will resort to telling only half the facts regarding interaction with the Floridian governor.

Jerry Demings is the Orange Country mayor. He has taken to the liberal media accusing Ron DeSantis of being absent as the new COVID-19 variant makes its way across the country. And it should not surprise anyone that the mayor is married to a woman that wants to run against DeSantis in the upcoming election.

Demings uses the new variant to help his wife gain popularity as she considers running against the popular governor. He stated that “Our residents, all Florida residents, should be outraged, and they should ask the question, ‘Where is our state? Where is our governor? Where is Ron DeSantis now?’ When is the last time you saw the governor do a press briefing on COVID-19?”

Demings makes it sound like the virus is the most important thing around. He ignores all the governor’s achievements on behalf of the state to keep people working and free from the tyranny of living under Biden’s rule.

Demings is a deep Democrat that would love for his wife to become the next governor. The liberal media failed to mention that this silly little man is married to Val Demings, who has stood against the governor on every issue.

DeSantis is a favorite for many people. He has done what he has promised and protected people from the evil living in Washington. Val Demings is a Biden lover that would love to infiltrate the governor’s office and open the state up to the horrors destroying deep blue states around the country.

The nastiness of the story from the AP is noted by Jennifer Rubin, a DeSantis hater who writes for the Washington Post. The AP plays up the Omicron numbers, but it is hard to believe it is wrong since most people do not even know they have it.

Rubin wrote that “As we recognize that covid-19 is not a deadly or even severe disease for the vast majority of responsible Americans, we can stop agonizing over ‘cases’ and focus on those who are hospitalized or at risk of dying.” The admission from Rubin comes after she once called DeSantis a leader of a cult.

Demings cannot get over the fact that DeSantis is doing a great job, and to attack him in this manner using the services of a liberal media channel is damaging to his wife’s image. People love the way the Republican governor has handled things, and it does not bother them that he is not out there crying about the virus-like all the Democrats are doing. They realize other things need more attention than some relatively friendly virus compared to some of the ones from years past.

DeSantis earned national fame when he signed a bill that banned businesses and other entities from forcing vaccination mandates on people. The bill also allows parents to sue schools that force students to wear masks. He has left it up to the parents to dictate what their kids are supposed to do in school.

The Associated Press is the media outlet that has once again left out unbiased details in its story reports. They have taken the stance to tear down Republicans and are willing to do it no matter the cost. The media giant is nothing more than a vigilante organization determined to help its liberal overlords stay in power. The Democrats are desperate to stay in power, and they are willing to say anything to make it happen, even if it means leaving out important details.