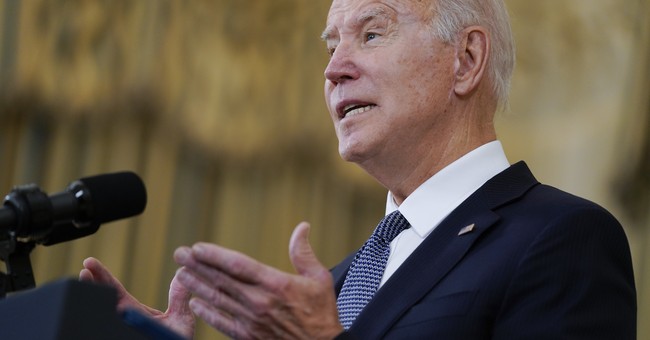 As RedState reported earlier, Joe Biden hobbled over to his creepy fake White House set today, loaded up some fake snow in his fake windows, and then set out to insult everyone’s intelligence. He trashed the unvaccinated, falsely claimed we can test our way out of the pandemic, and had several mental breakdowns, with the appearance of Biden’s senility just being expected at this point.

In short, to the extent that the president said anything intelligible at all, none of it was surprising or new, and that’s what really struck me the most about it. It wasn’t just that it wasn’t new. It was that it was a repetition of prior statements that are largely outdated and no longer supported by the data we currently have regarding the coronavirus.

I won’t post every example as this article isn’t meant to be a round-up of his comments, but his continued insistence that we are in a “pandemic of the unvaccinated” was probably the best example. Here’s what that sounded like.

That’s just laughably untrue. In fact, one of our editors here is fully vaccinated and currently has COVID-19 (she posted it on Twitter, so I think I’m good to share that). Further, one look at New York’s record-breaking case numbers will show you that the vaccinated are clearly getting the coronavirus at extremely high rates. Even if you want to assume Biden is talking about hospitalizations, the vaccinated represent nearly a quarter of those, too, based on reporting out of Miami.

That’s not to say that those in certain risk categories don’t have a higher chance of hospitalization or death if they remain unvaccinated, but it is to say that calling this a “pandemic of the unvaccinated” is just patently false. Clearly, the data shows that the vaccinated are also not only spreading COVID but that they represent a majority of infections at this point. They also represent a not-insignificant portion of hospitalizations.

Further, his comments on controlling the virus and his insistence that testing will somehow make a difference harken back to March of 2020. Oddly enough, Biden seems to actually think it is 2020.

When you put all this stupidity together, what you are left with is a president who adheres to a series of quasi-religious tenants about COVID that have largely been proven false. I’ve already covered his claims about the unvaccinated, but when it comes to testing (which is what he’s addressing in the above clip), there is simply no reason to be testing asymptomatic children as a prerequisite for attending school. Doing so is wasteful and pointless. It simply serves to spread fear and panic where it is not warranted, as case numbers are just not that relevant at this point. The risks for children also continue to be largely non-existent.

Lastly, let’s note that Biden still refuses to acknowledge the existence of natural immunity when discussing the much-maligned unvaccinated. Even Dr. Anthony Fauci reluctantly admitted its efficacy last weekend while discussing South Africa’s speedy victory over Omicron. But that’s apparently a bridge too far for Biden, who relishes in trashing the unvaccinated; facts need not apply.

Honestly, I’m left wondering which one of Biden’s handlers thinks it’s a good idea to keep trotting him out to repeat all these same, outdated falsehoods. What exactly is being accomplished with these awkward appearances? It’s certainly not helping his approval ratings, and in the end, he’s only creating more distrust in the government’s response.