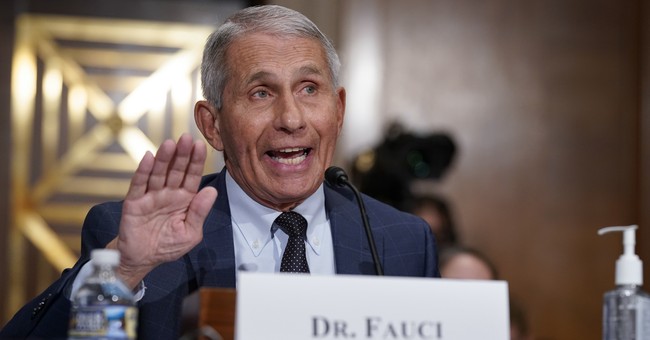 Dr. Anthony Fauci, who seems to constantly be giving interviews (exactly when does he work?), was on with CNN’s Dana Bash. Bash asked him if cotton and surgical masks were effective against Omicron. Fauci responded, “When the CDC says they are effective, in fact, they are.”

Think about that answer for a minute. He didn’t say they are effective, he said “when the CDC says they are,” then “they are.” So if the government deems it so, then it is, according to Fauci, regardless of what the science is. He was asked the question because of a recent report from the Wall Street Journal that single-layer cloth masks may not provide adequate protection against Omicron.

Now, of course, Fauci’s comments on masks have ‘evolved’ over time, from his first comments back on March 8, 2020 when he discouraged mask-wearing and effectiveness. He later claimed that he said that because he wanted masks to be preserved for medical personnel. Fauci also downplayed masks in a private email in February of 2020. He has since then been very pro-mask.

Dr. Robert Malone who is a noted virologist and immunologist got a lot of attention when he compared mass formation psychosis in pre-World War II Germany to what we are today experiencing in America in response to COVID. And he didn’t mince words when Fox’s Laura Ingraham asked him what he thought of what Fauci had said to Dana Bash regarding the masks and the CDC.

“I mean, it’s Tony. What can I say?” Malone said. “Tony has no integrity, he lies all the time, and me and my peers have been watching this for decades. We just shrug our shoulders and shake our heads and say ‘It’s Fauci.'”

Boy, isn’t that a telling response? And notice he calls him “Tony,” indicating both the familiar and in this case, the dismissive. He’s not holding back what he thinks. It doesn’t sound like Malone thinks that Fauci is “science” to be unquestioned. He also notes it’s not just him that thinks that but that it’s a shared peer opinion. Yet, so much of our policy over the past two years has hinged upon this man, despite all the questions raised. The question is: if this was known, why was he still there? Because it’s government, which is a haven for ineffective and bad bureaucracy, and the swamp still needs a whole lot of draining.