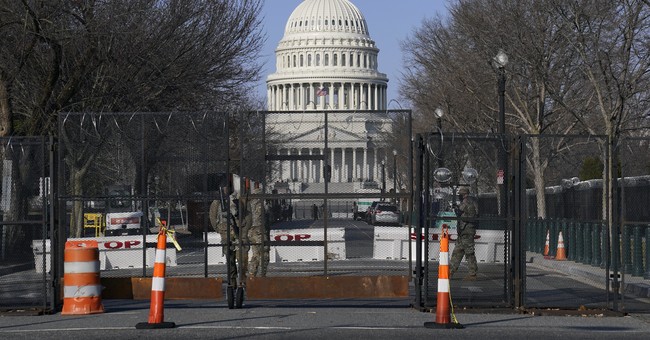 This week I plan on catching up on a few things that got lost in the holiday shuffle. My family also got COVID over the holidays, so we’ve just been basically doing the bare minimum to get by. Like a lot of you, I still have Christmas decorations to put away and gifts to find places for. Of course, I need to get started on my workout routine, because obviously 2022 is the year I finally get fit. New year, new you…again. Also, the first week in January at work is when we lay out our strategies and goals for the year. I’ve got a lot going on.

For the progressive left, what happened that day was tantamount to the near end of western civilization. For everyone else, it was a right-wing version of a Black Lives Matter protest. Yet, the left insists on keeping the hysteria narrative alive, even as the country has far more pressing matters on our minds. Even as I write this I’m wondering if my passive descriptions of the events will pass the “fact-checker” overlords on social media. That’s how committed they are to squashing any other narratives about the day but their own.

I have no data to back this up, but I would venture to guess (and really, how is guessing at the information any different than what CNN has been doing for the last decade?) that very few people outside the New York City CNN bubble are genuinely concerned about what happened that day, or even think about it anymore. Most people are thinking about empty shelves in their stores, gas prices, whether or not their children will get to finish the school year, protecting their health, the season finale of Yellowstone…almost anything other than the kerfuffle at the Capitol.

So, here we are, mere days away from the first anniversary of two-thousand and twenty-first January 6th of the Christian era and one can only imagine the overwrought, emotional, over-the-top documentaries and videos and columns we’re about to find ourselves subjected to. Think Adam Kinzinger times eleventy-billion. It’s going to be one giant circle-jerk (if you’ll pardon the phrase).

And that’s fine. Would we expect anything less? Here’s the thing…to most people in this country – I truly believe – it’s all meaningless. As I said before, Americans have a lot going on in their lives, and even if they were on board with the current mainstream narrative, we’re all suffering from a lot of panic fatigue. People can only be so scared and so worried for so long. They’ll start to prioritize what is left of their will to freak out and let’s face it, if we’ve already moved on from the horror show that was the Afghanistan withdrawal, we’re pretty ready to dump January 6, 2021, into the dustbin of time.

Perhaps those of us in conservative media should help give that notion a little push. Let’s take a page right out of the playbook of our media opponents. Let’s simply…erase it.

CNN and other mainstream outlet colluded to make the Hunter Biden laptop story disappear until the timing was convenient for their political purposes. They crushed information on COVID therapeutics and the effectiveness of masks. They banned anyone who mentioned anything about COVID treatment that was outside their sphere of approval. Even today, as I write this, CNN has released a “shocking” story claiming obesity and diabetes could possibly be key factors in making COVID deadly. This is something some accounts were being banned or suspended for saying too much mere months ago. They know how to memory-hole the stories they don’t want to talk about, so how about we do the same?

They’ve been able to make stories go away by the very act of pretending those stories weren’t real. The right-wing media sphere hasn’t cared much about the events at the Capitol last January since, oh…last January. Why should we keep letting progressives explain to us why we need to care? Why let it bother us at all? Political punditry and “journalism” have become about 75% reacting to the other side these days. If we stopped reacting to this story, how much air might we take out of it?

So, here’s my challenge to my colleagues. Don’t cover the one year anniversary. Don’t cover any of it. Don’t write reaction pieces to whatever dumb thing Brian Stelter or Joy Reid says. Don’t send out indignant tweets. Don’t share ridiculous progressive blog posts just so you can hate-tweet them. If you must comment at all, just call it misinformation and declare your refusal to tolerate “the crazies.”

Two can play this game. It’s time we conservative media stop being solely reactionaries and start acting like we have the power to set the narrative.

Fake it til you make it.