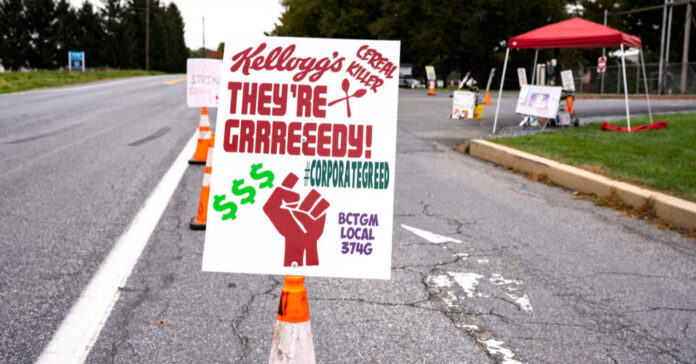 As Kellogg shifts its plans for business towards an agenda that better appease the left-wing mafia, their workers held their ground and kept pushing for a new contract. Many thought they would never get this after the strike started back in October. With profits going down as cereal needs to maintain a somewhat stable price point, the breakfast giant was looking for ways to cut corners to keep their profits up.

Workers will never allow their benefits to be cut, and as a union, they have strength in numbers. A strength that is not easily tested, but Kellogg’s understood the assignment and made the challenge anyways. This didn’t work out too well for them as the union rejected multiple offers while on the line. One of the last rejections led Kellogg’s to threaten to just close shop and move production to Mexico or start importing more visa-sponsored workers.

This threat did not fall on deaf ears, mind you. Even Sen. Bernie Sanders (I-VT) had his thoughts on the matter. “If you love American workers, you don’t ship their jobs to desperate people in Mexico and pay them 90 cents an hour.” Considering the main focus of the strike was the attempts by Kellogg to limit the progression of lower-wage level workers to advance into the higher ‘legacy level’ wage worker positions.

When you sit back and look at the history of manufacturing and production in this country, that is a horrible move by Kellogg’s. For decades now, people have been fed the ‘gotta start at the bottom’ line about most careers. Working for a production facility like Kellogg’s is a career and one most people take very seriously. They love the production life and want to grow with the company. If you have ever known a blue-collar factory worker, they largely believe in the products they manufacture. They drive the vehicles they make, or in this instance, they eat the cereal they produce. To support anything else is treasonous to them.

So for the company that employs them to turn their backs and try to cut wages is nothing less than reprehensible, and their union let them know this. As the strike went on, they hired scabs to keep things going, and they were not well received. While some union employees chose to cross the line, they were very limited, and the union did their best to keep people on strike. This is what got them their contracts back.

Bakery, Confectionery, Tobacco Workers, and Grain Millers’ International Union (BCTGM) President Anthony Shelton earlier in December said “The members have spoken. The strike continues…The BCTGM is grateful for the outpouring of fraternal support we received from across the labor movement for our striking members at Kellogg’s. Solidarity is critical to this fight.” That support let the union delegates and members know that they were on their way to achieving the change they were seeking.

Upon the change of the contract, Shelton said “Our striking members at Kellogg’s ready-to-eat cereal production facilities courageously stood their ground and sacrificed so much in order to achieve a fair contract…This agreement makes gains and does not include any concessions.” Which was music to the ears of not only Kellogg’s workers but to thousands of union members across the US. This is proof that unions work, and that they are crucial to the American workforce. Now if only Kellogg’s would bring back Cinnamon Roll Buns.