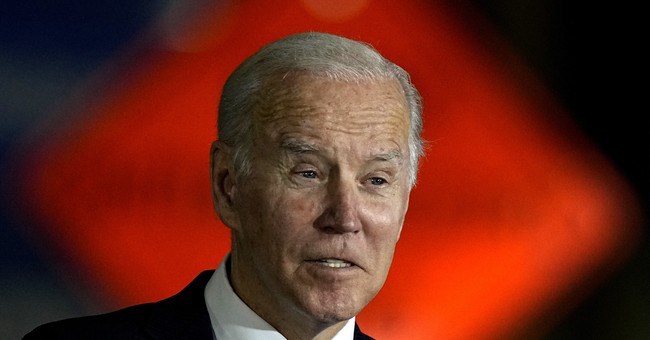 This morning, RedState reported on Joe Biden’s plan to escape blame for the nation’s inflation crisis, with the core of that plan being to blame the supposed greed of “meat conglomerates” for the rising prices at the grocery store. Sure enough, he followed through today, producing a series of incredibly bizarre clips full of gaslighting and bouts of senility.

You see, these members of Big Meat were apparently not greedy at all under the Trump administration, where beef and chicken prices remained affordable and stable. Rather, in what I’m assured is a complete coincidence, prices only began to rise after Joe Biden spent trillions of dollars the country didn’t have on various boondoggles, from COVID “relief” to infrastructure.

Anyway, let’s get the senility out of the way first. Here was the president attempting to say something. What that something is, you can try to figure out.

Apparently, according to the brilliance that currently heads the US government, the price of a pound of beef (I assume he means hamburger meat) is now $5 dollars when it was less than $4 before the pandemic. And the reason for that is…that a pound of meat now costs $5 when it previously cost less than $4? Well, alrighty then. I’m glad we got that figured out.

Of course, even though he’s incapable of articulating it, what Biden is trying to say is that meat companies have created a monopoly that is artificially driving up prices, unconnected to any other economic factors. It’s also worth noting that Biden loves monopolies when it comes to them harming children in the form of teachers’ unions.

To be frank, the idea that meat prices are up due to greed is nonsense. There’s no evidence whatsoever to back up that charge, and it requires you to pretend that the rest of the nation’s industries aren’t mired in an inflationary boom. Yes, meat prices are up. So are the prices of hotels, gas, and essentially everything else.

Now, what makes more sense? That Big Meat has suddenly, after years of not being greedy, suddenly decided to bilk the American people only when Biden is in office? Or does it make more sense that they are subject to the same market forces every other industry is subject to? It takes diesel fuel to get meat to market, and guess how much that costs these days? It takes plastic and styrofoam to package meat products. Guess what has increased in price? Labor costs are also way up, from those working in the processing plants to those doing administrative work.

Those are all the real reasons why your ribeye costs more. It’s not greed, as much as I’m not a fan of many major corporations. Rather, it’s the reality of operating within the horrific economic environment created by Joe Biden. And the president, instead of taking responsibility, now wants to mimic Elizabeth Warren, blaming shadowy CEOs for problems he actually caused.

This is what happens when you put a dementia-ridden, know-nothing in the White House.