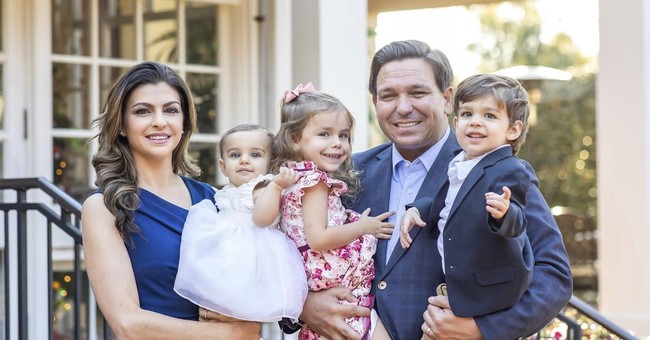 We previously reported how the “Where’s Ron” conspiracy theory Democrats and liberal media types’ pushing against Florida Gov. Ron DeSantis blew up in their faces. They’d been trying to claim that he’s been missing over the past week during the “crisis” in his state.

As we noted, not only wasn’t he missing, he’d been working, doing meetings, and in the office this week, despite it being a holiday week. His office regularly releases his schedule to the media, so the media knew that. But some went along with the conspiracy anyway. But on top of still working, he was also taking his wife Casey to cancer treatments.

A couple of honest media folks backed up where DeSantis was.

When the information about his wife was revealed, it made people who had pushed the ridiculous conspiracy, like Rep. Alexandria Ocasio-Cortez (D-NY) look extra slimy.

DeSantis’ spokesperson called out AOC for her signing aboard the idiocy.

But even after the information about DeSantis’ wife was revealed, there were still some in the liberal media who couldn’t let their horrible tribalism go and continued the attack because they couldn’t be bothered to just do their job and find the truth.

“Spin, spin spin,” Florida-based journalist Leslie Abravanel tweeted. “While I feel for his wife, cancer treatments take a few hours. He is the governor of a state in crisis. If he can’t govern and be there for his wife he should resign.”

Um, journalist? He was working and that schedule was available to the media. You simply chose to ignore it. His wife’s treatments took more than a few hours, since the honest media said he was “by his wife’s side during cancer treatment for much of this week.” But this is an example of just how vile the left can be when they abandon morality for the pull of politics. How you can treat a family having to deal with cancer like that is beyond me. But these folks live in unreality.

The other reason I wanted to point this out was how it is an indictment not of DeSantis but of the Democrats who Abravanel supports. Everything she says is more applicable to Joe Biden, who said there was no federal solution as the numbers of COVID cases hit the highest ever and fled to the beach for a week. There was also Gov. Phil Murphy of New Jersey who just came back from eight days in Costa Rica, as New Jersey has one of the highest case rates in the country. Then going back a couple of months, you also had Biden Transportation Secretary Pete Buttigieg who bailed on his position for two months of unannounced family leave during the supply chain crisis. Then there was California Gov. Gavin Newsom who just inexplicably disappeared for ten days for “family obligations” and canceled engagements that he had scheduled — including being at a climate summit.

So, if we apply Abravanel’s standard, then these Democrats should be submitting their resignation letters. But not only aren’t they doing that, the same folks who had a fit over the imaginary “DeSantis missing” conspiracy didn’t have any issue or call any of these Democrats for going on vacation/taking off. Indeed, Abravanel sent Buttigieg congratulations.

Meanwhile, DeSantis celebrated the New Year at a concert last night, touting the “freest state in the United States.”

“I wish you all a Happy New Year,” DeSantis told the crowd in attendance. “I’m glad we’re going to be able to celebrate the new year in the freest state of the United States.”

Now that’s the kind of “missing” we all could use.