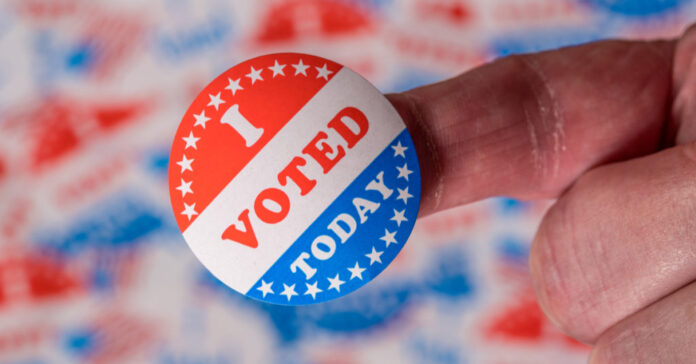 Voting rights have been under attack by the left for a while now. And, it’s ridiculous when you think about it. Why is it so bizarre to ask people to show ID when they vote in local or federal elections? We ask people to show ID to buy beer, obtain medical care, or cash a check, so why should voting be any different?

Kamala Harris was a package deal with Joe Biden. The two of them together were voted into the White House for the people, by the people.

The people want to make sure that elections are safe. Yet, Kamala Harris believes that voting rights need to change.

It’s as if she has no idea what’s actually going on. Perhaps if she weren’t letting everyone through the southern border, we wouldn’t be so concerned about voting rights. In a “Face the Nation” interview on CBS, Harris spoke with Margaret Brennan about passing federal voting legislation.

Harris wanted to provide some history of who she was as a person, with having parents who met while they were active in the Civil Rights movement. But this isn’t about civil rights anymore. This is about protecting our nation from outside interference.

Harris says that she’s fighting for the “justice and the ideals of our democracy.” And she seems to struggle with knowing that there are at least 18 states “that are making it difficult for the American people to vote.”

The reality is that Harris is making this difficult. If we didn’t have so many illegal aliens entering the country right now, perhaps we wouldn’t care if someone didn’t have an ID at the polling station. However, when we have the number of illegals that we do – and the Biden administration is flying and busing them into every major city, we have to ask for some basics.

We ask for voter registration. We ask for some proof that a person is who they say they are. This isn’t to make things difficult. It’s to prevent fraud. It’s to ensure that we can name the winner of an election without one side hooting and hollering that there has been some kind of voter fraud. We saw it when Trump was elected from the left and we saw it again when Biden was elected from the right.

If Harris thinks that we’re standing in the way of legitimate Americans being able to vote, perhaps she should focus on the bigger issue – providing IDs to every American. Even the illegal immigrants are given some kind of ID when they’re released into the interior.

We’ve even got liberal cities and states that are allowing illegal immigrants to vote in their local and state elections. That’s a problem. Why should someone who is not even legally allowed to be in the United States voting to have input on how things are run?

Harris really needs to be thinking about this before she has the audacity to say that “voting rights is one of the most significant issues that is facing us as individuals and as leaders today, there’s no question, no question.”

Oh, Madame VP, but there are questions, lots of questions.

Why isn’t the biggest issue foreign interference? Why isn’t it that there are black and homeless people in the U.S. without sufficient identification?

If everyone who wants to vote and is legally allowed to vote is unable to do so because they are lacking sufficient ID, that should be made a priority. Why? Their lack of ID is also preventing them from functioning as a member of society – they cannot open a bank account, they cannot receive healthcare, and they cannot even get a job.

As usual, Kamala Harris doesn’t understand what the biggest issues are in the country. She’ll fight the fight that no one cares about instead of tightening security at the border or preventing illegal aliens from voting on American issues.