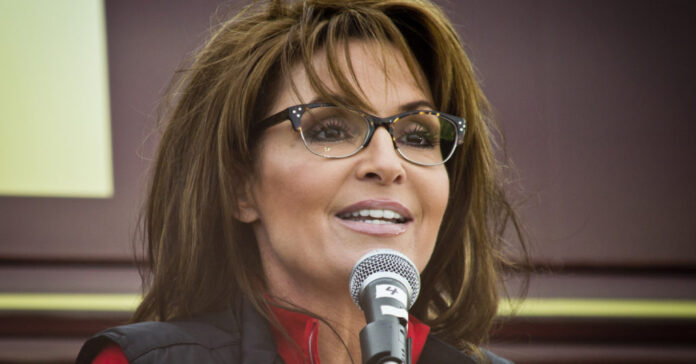 Former presidential candidate, former Alaska governor, and former sound bite extraordinaire Sarah Palin has been vocal as she can be about the idea of vaccines for COVID since the pandemic first hit. To keep the pressure on those in Washington on full tilt, she has been doing whatever she can to stay in support of  Republicans everywhere, and that has taken her to the Turning Point USA conference in Phoenix, AZ.

“It’ll be over my dead body that I’ll have to get a shot. I will not do it. I will not do it and they better not touch my kids, either… I think if enough of us rise up and say ‘no, enough is enough,’ there are more of us than there are of them. So for us to be hesitant, and for us to kinda wait and let somebody else take this on and stand up and say ‘enough is enough…You all need to look around and realize that if you stiffen your spine and take those positions that you know are right, especially when it comes to government telling us what we have to inject into our own bodies. Realize that those around you as you stiffen your spine, their spines too, will stiffen.”

By standing up, you give that person who’s just a touch more hesitant the gumption to say no, too. We are all in a position to be leaders. To tell the government that they need to keep their laws and mandates off our bodies. Should we choose to get the vaccine or not, that is our decision. Not something that our gederal or local leaders need to be deciding on our behalf.

Back in April, Palin and her family had their own run-in with COVID-19. Afterward, she spoke to the Washington Examiner and shared her struggles. “As confident as I’d like to be about my own health, and despite my joking that I’m blessed to constantly breathe in the most sterile air, my case is perhaps one that proves anyone can catch this. One of my daughters awoke to having lost her taste and smell [and] immediately had a positive test, then was quarantined in isolation.”

This assumption that Alaska has some of the cleanest air in the land is spot-on, especially where they reside. While in the dead of winter it can become a bit hazy due to all the heaters going, it’s nowhere near as bad as places like LA or NYC. For her to get it especially being so remote was proof that it was coming for anyone it could find.

With her family making a full recovery, Palin maintained that the American people need to make their own decisions, and she is right to advocate for this freedom. The people need to know that they have the right to stand up. This (in part) is what free speech is about. It’s the right to make your own choices and to say out loud what that decision is. A personal decision that is unpopular with politicians or your fellow man is still a decision made freely, and as such, it is your right to make it for yourself.