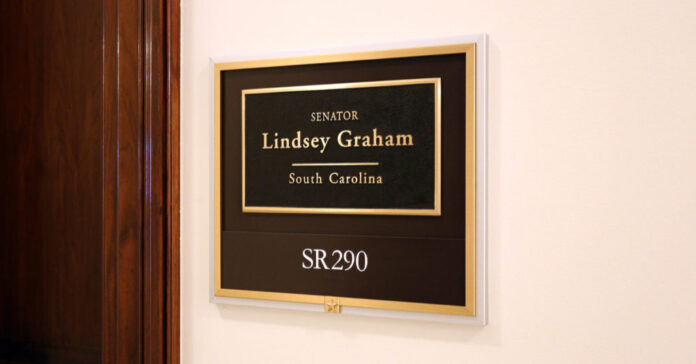 Lindsey Graham gleefully celebrated a virtual stalemate in Senate negotiations focused on the Biden administration’s $1.75 trillion “Build Back Better” social spending package. The Republican senator from South Carolina said that he thinks the bill from the Biden is “dead forever.”

The outspoken senator was talking with Sean Hannity from Fox News recently and said that the deadlock between moderate Democratic senator Joe Manchin from West Virginia and his more progressive colleagues over the cost has basically killed the bill.

Graham said, “I think Build Back Better is dead forever, and let me tell you why: Because Joe Manchin has said he’s not going to vote for a bill that will add to the deficit. Well, if you do away with the budget gimmicks, Build Back Better, according to the CBO [Congressional Budget Office] adds $3 trillion to the deficit. He doesn’t want to vote for a bill that makes inflation worse.”

That was not all that Senator Graham had to say about Biden’s baby. He attacked the “Build Back Better” plan for child care provisions. He went after the bill’s denial of federal funds for religious daycare centers. And he went after the bill’s increase in the costs for child care, even though the president insisted over and over again that “Build Back Better” would lower costs.

Graham clearly outlined the problem that if a family had a child in a religious institution that was providing care, they would not be eligible for the body from the government simply because it was a religious institution. The president’s plan would increase the wages of child care providers so that the average family would be spending $13,000 more for this care. Graham said that this plan from the White House is, in effect, declaring war on religious institutions. He declared that when all is said and done, this bill will not cost $1.75 trillion, it will cost $5 trillion. Graham called it an inflation bomb.

This is why Joe Manchin isn’t voting for it. He promised the people of West Virginia that he would vote for a bill that adds to the deficit and is full of gimmicks.

“The CBO and the inflation number last Friday, I think, kill Build Back Better. They were trying to pass a lie, and God bless Joe Manchin for sticking to his guns,” Graham noted.

It was reported that Chuck Schumer, the Democratic Senate Majority Leader, tabled the “Build Back Better” bill for the rest of this year because of the deadlock. The report said that Schumer did not have the votes because Sen. Manchin remained non-committal.

But the Majority Leader apparently is still holding out hope that there can be some action taken on voting rights this year. There are a number of sources that say the Democrats are hoping for an agreement on a rules change now that four moderates have been meeting together to discuss this issue. Senators Manchin, Tester, Kaine, and King, all moderate Democrats, have been putting their heads together to come up with a plan for a rules change.

Manchin has made clear what his hopes are for the “Build Back Better” plan. He said inside the Capitol recently that he wanted a bill that was cut even further. He wanted his colleagues to select their highest priorities and to fund them over the full 10-year life of the bill. He did not want short-term funding like the bill presently upholds. And he wants the price tag over the long haul to stay at $1.75 trillion.

Graham’s probably right, that will be too much for his progressive colleagues, and the bill might be dead in the water.